Created especially for 45 at 45, Alison Saar’s powerful sculpture Torch Song and its accompanying painting feature a classic songstress caught in a passionate musical moment. The elegant figure of the sculpture is crafted from rough materials, evoking the coy combination of sensuality and protest perfected by many celebrated chanteuses of the 20th century. 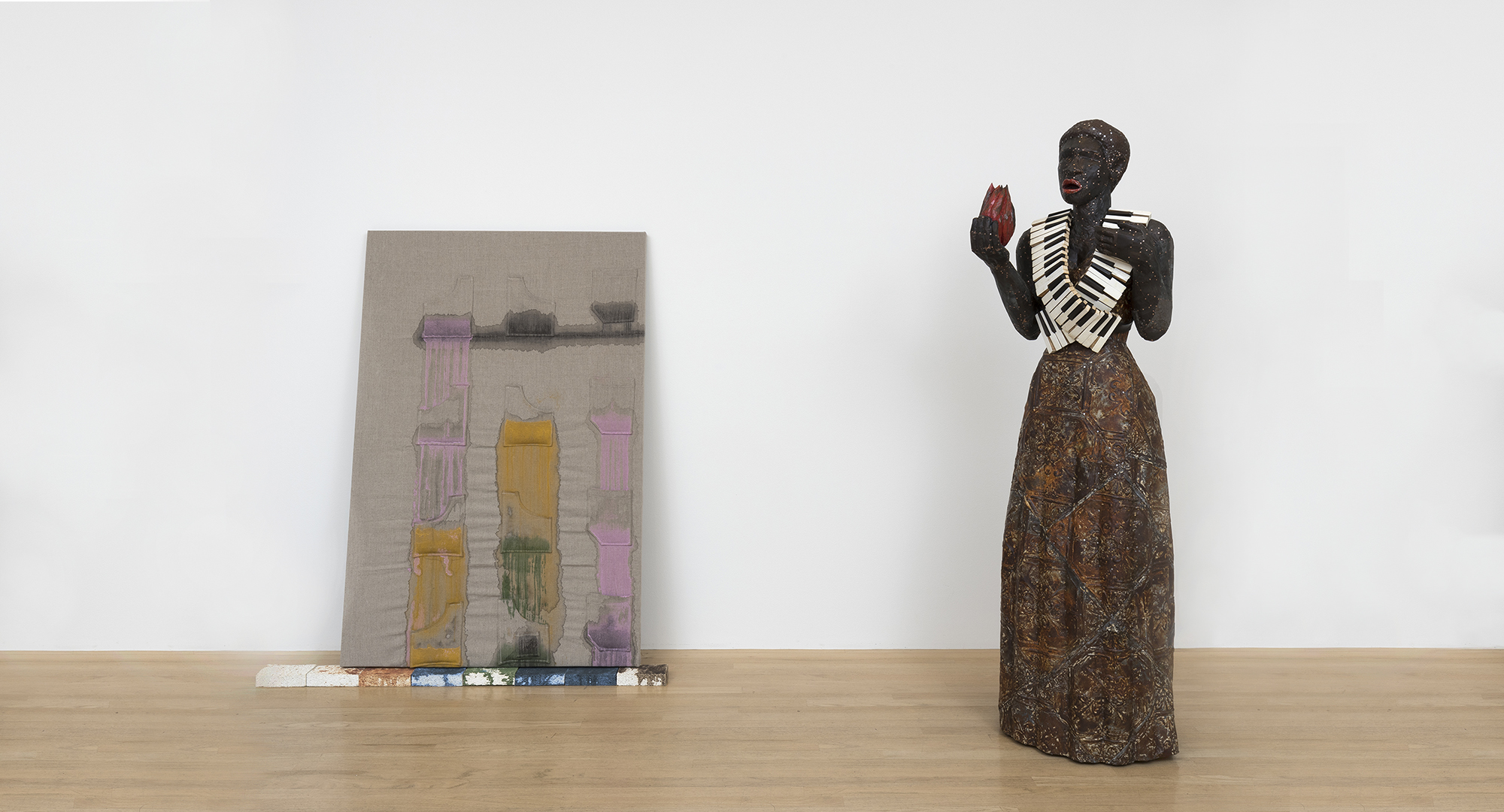 As a response to all the vitriol in our nation, I looked for solace in the history of song as protest.

Traditionally a torch song is a lament of lost love but in the legacy of the Blues, songs of protest were often presented under the guise of a love song. Nina Simone, Bessie Smith, Billie Holiday and Sister Rosetta Thorpe, just to name a few, were all fierce in their resistance to racism and bigotry. Angry times called for angry songs. - Alison Saar 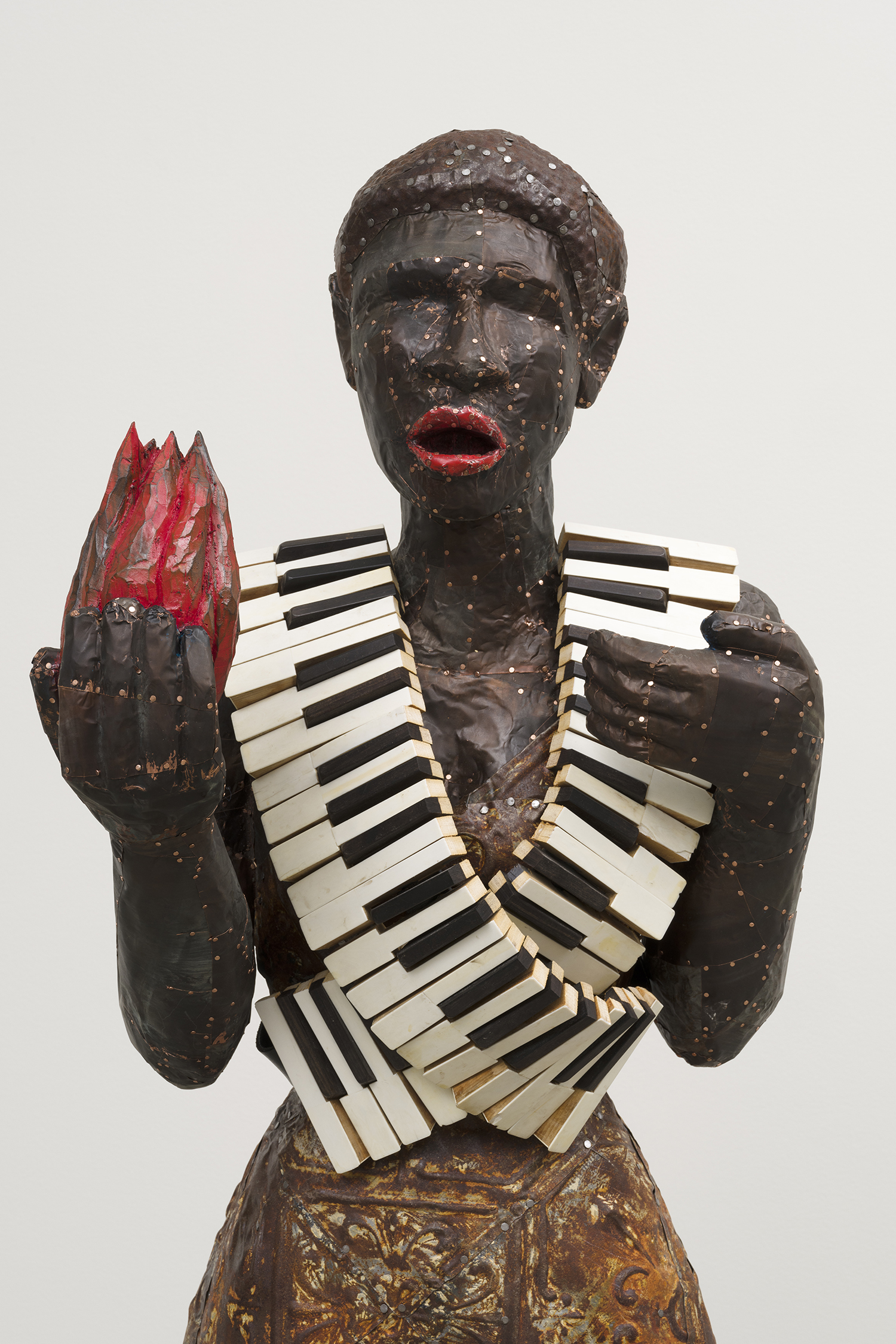 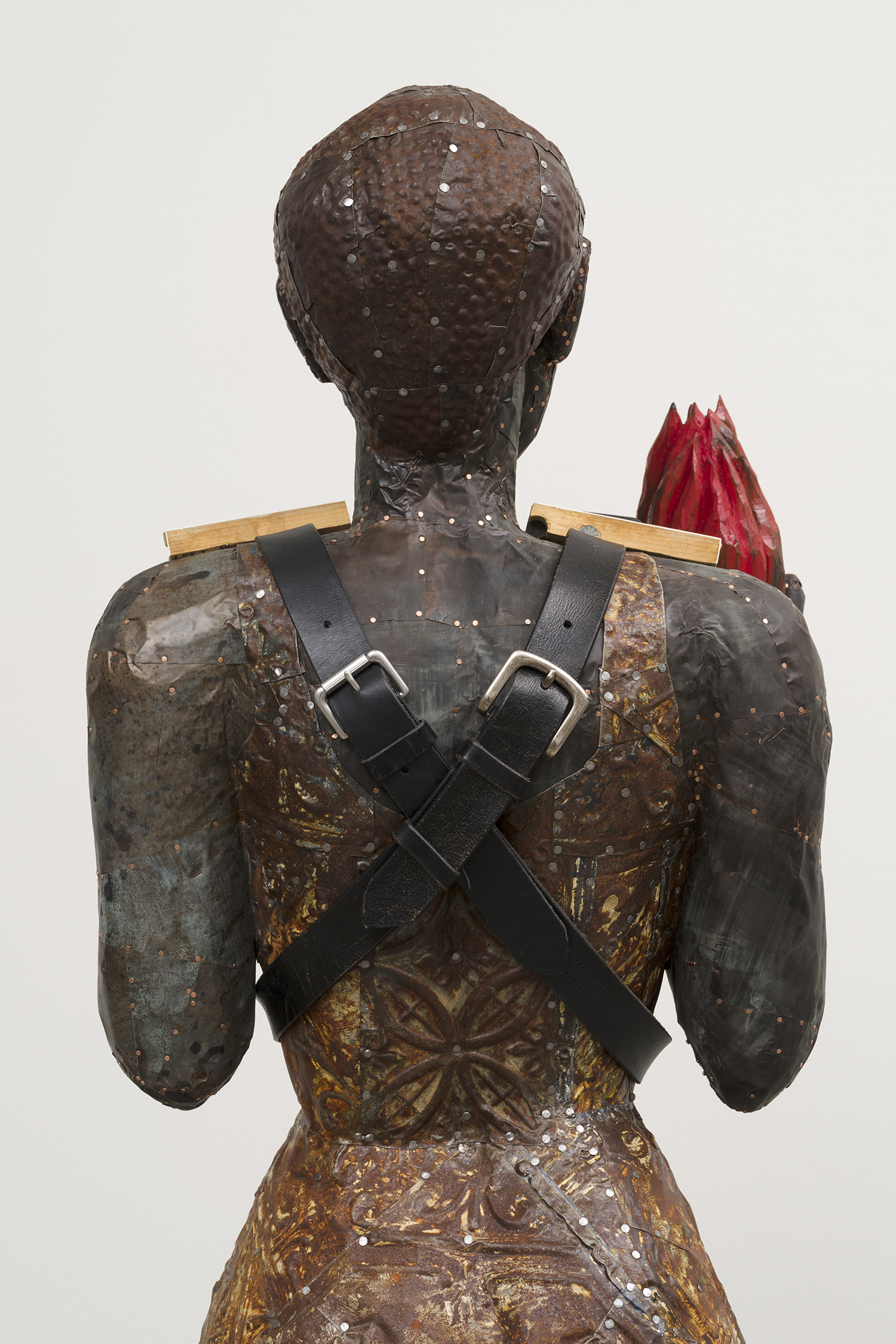 Today, as we yet again find ourselves in turmoil, in my piece Torch Song the chanteuse is righteous and passionate. In her hand the “torch” has been transformed from the smoldering embers of a jilted lover to a fistful of flame, a beacon, a call to rise and fight. Music is her weapon and piano keys are worn as bandoliers across her chest paying tribute to the Mexican revolutionaries Emiliano Zapata, Petra “Pedro” Herrera and other soldaderas in their struggle for equity and human rights. - Alison Saar 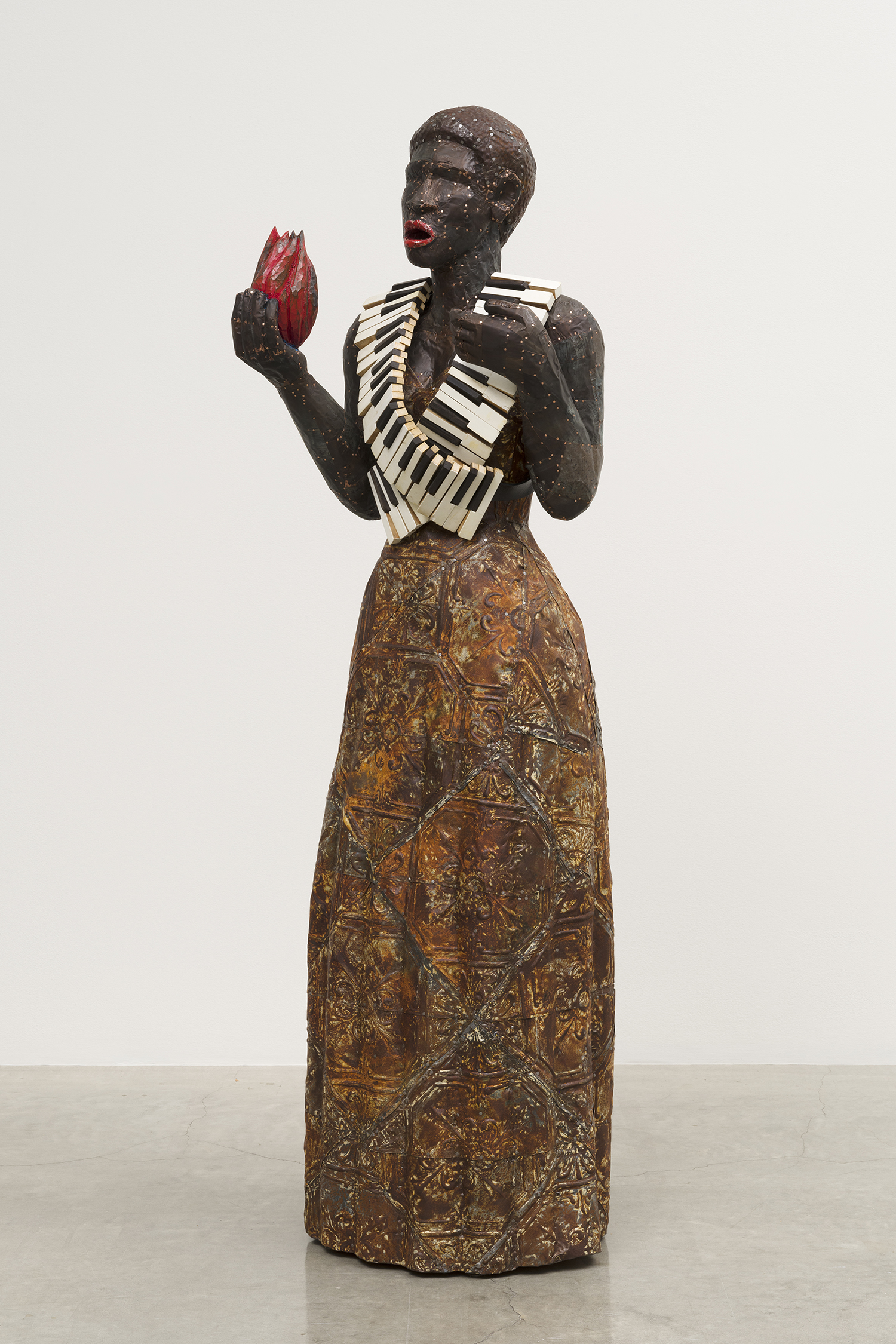 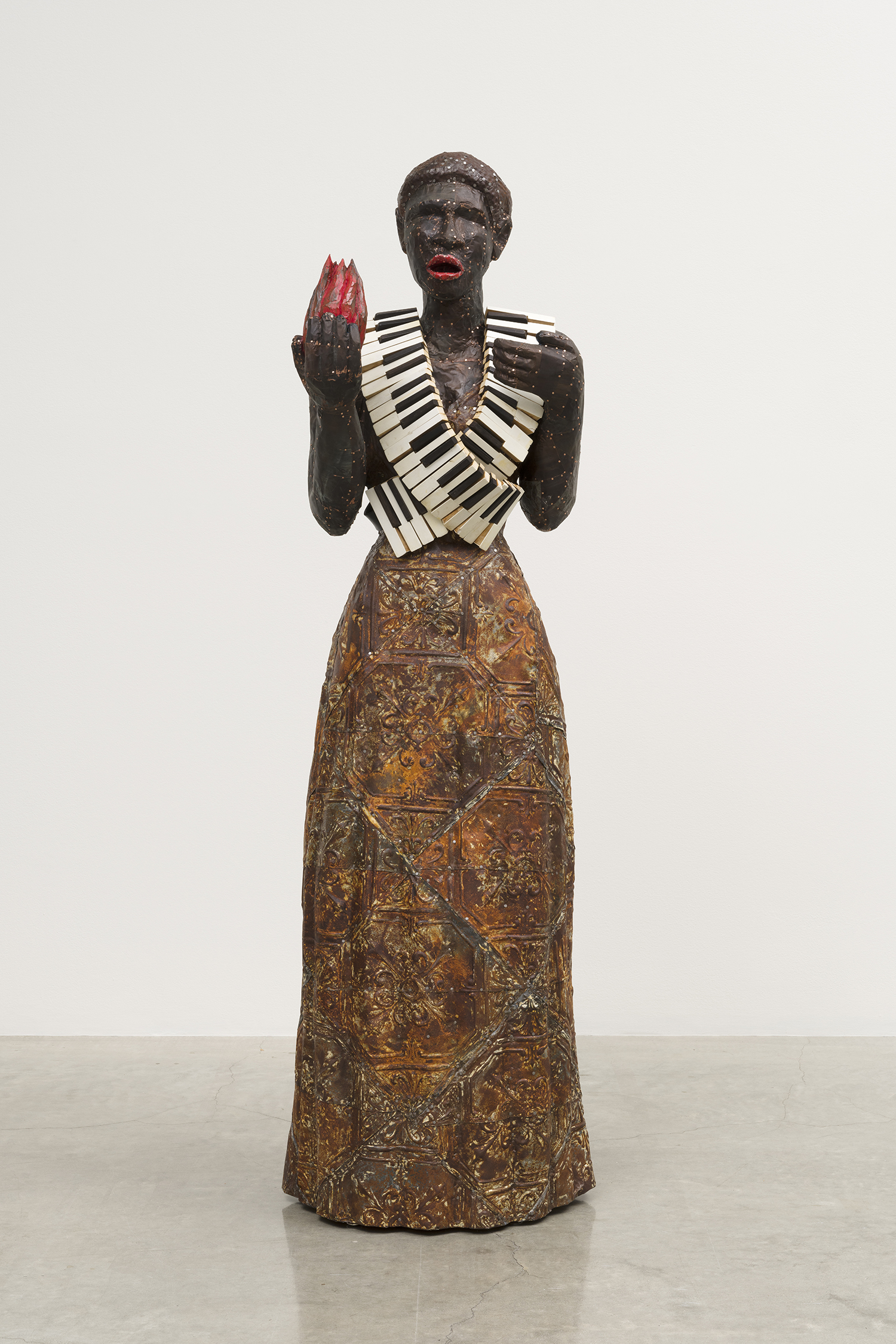 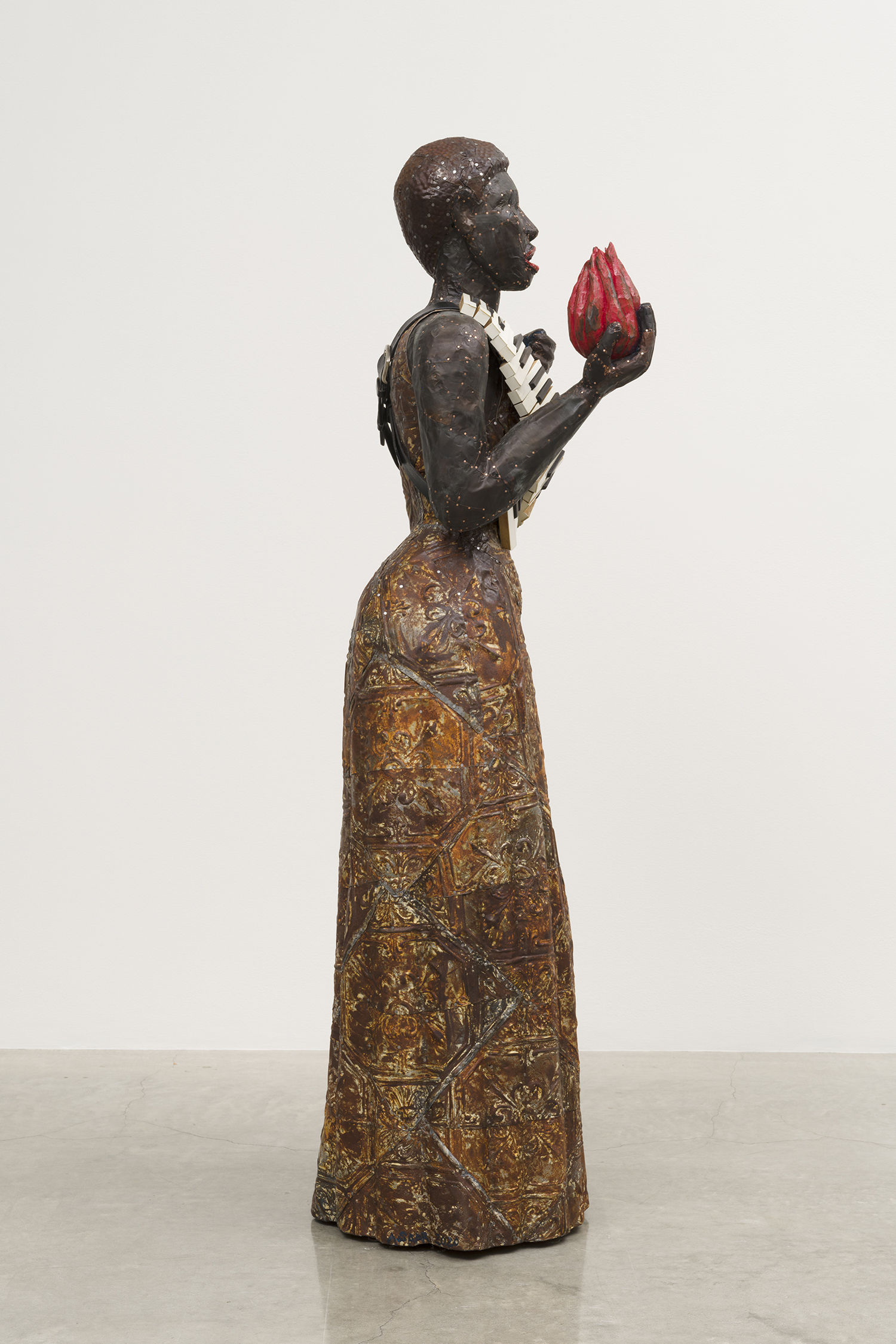 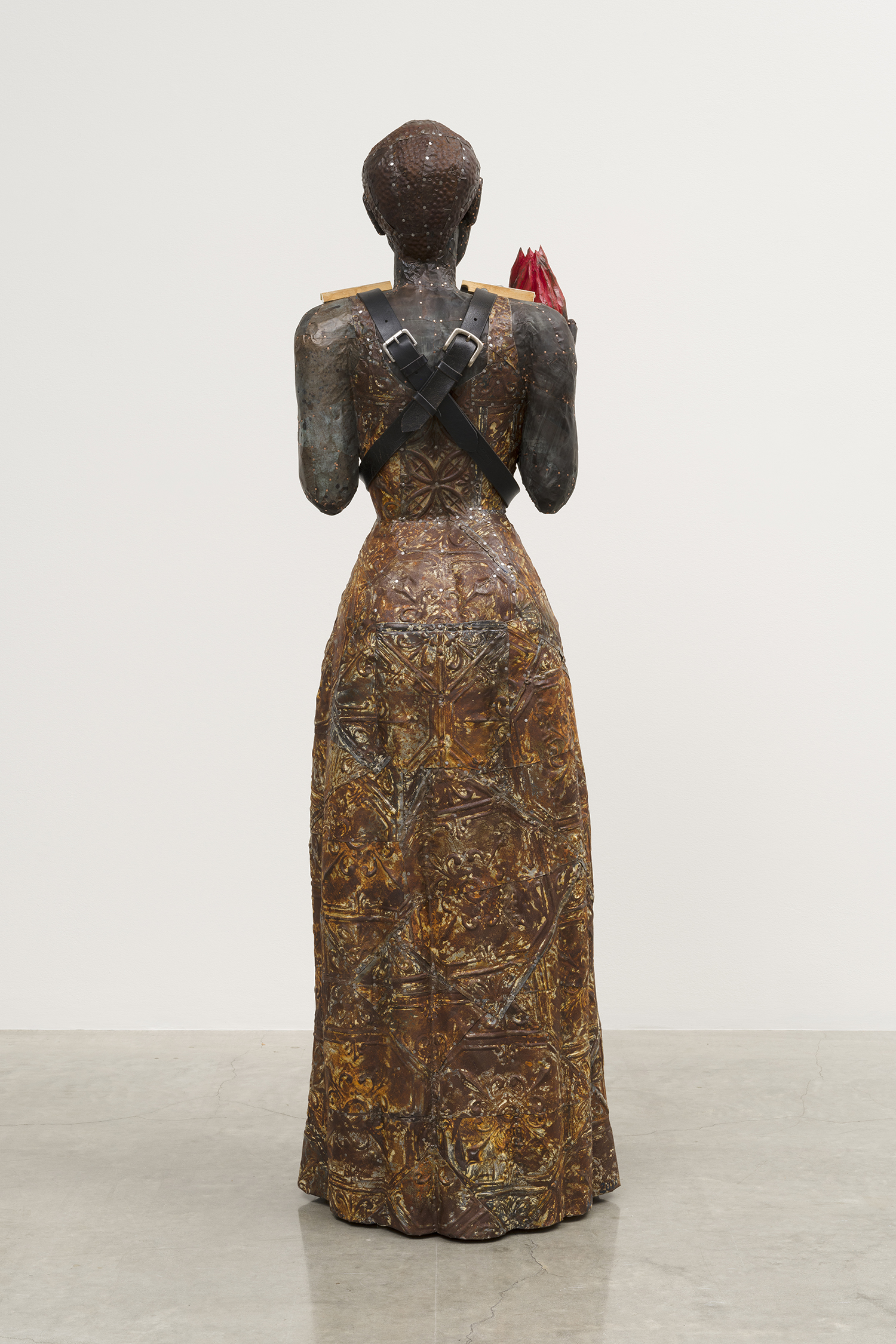 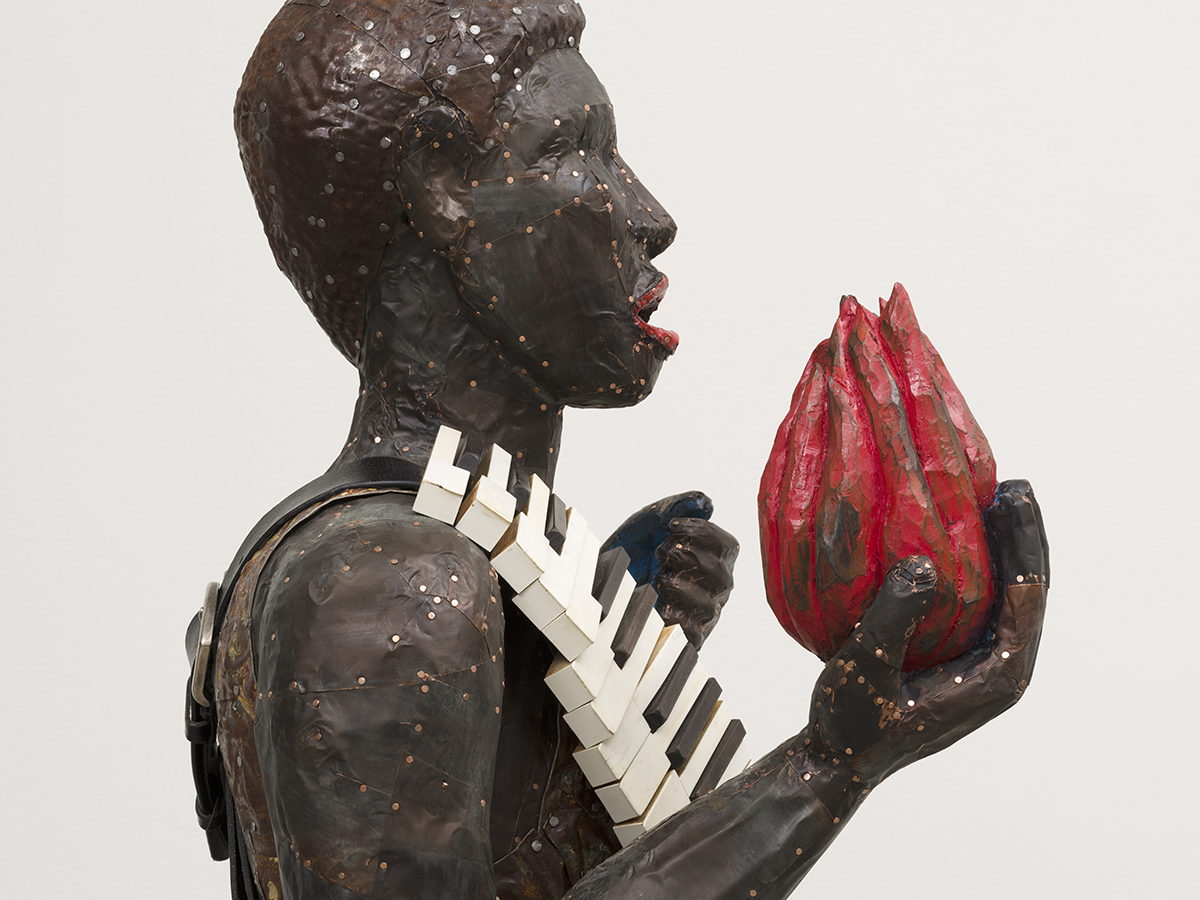 Inspired by Alison Saar's sculpture Torch Song, this collection of songs by women artists are incantations of female empowerment that resist the status quo and keep the spirit of protest ablaze. Also available on YouTube. 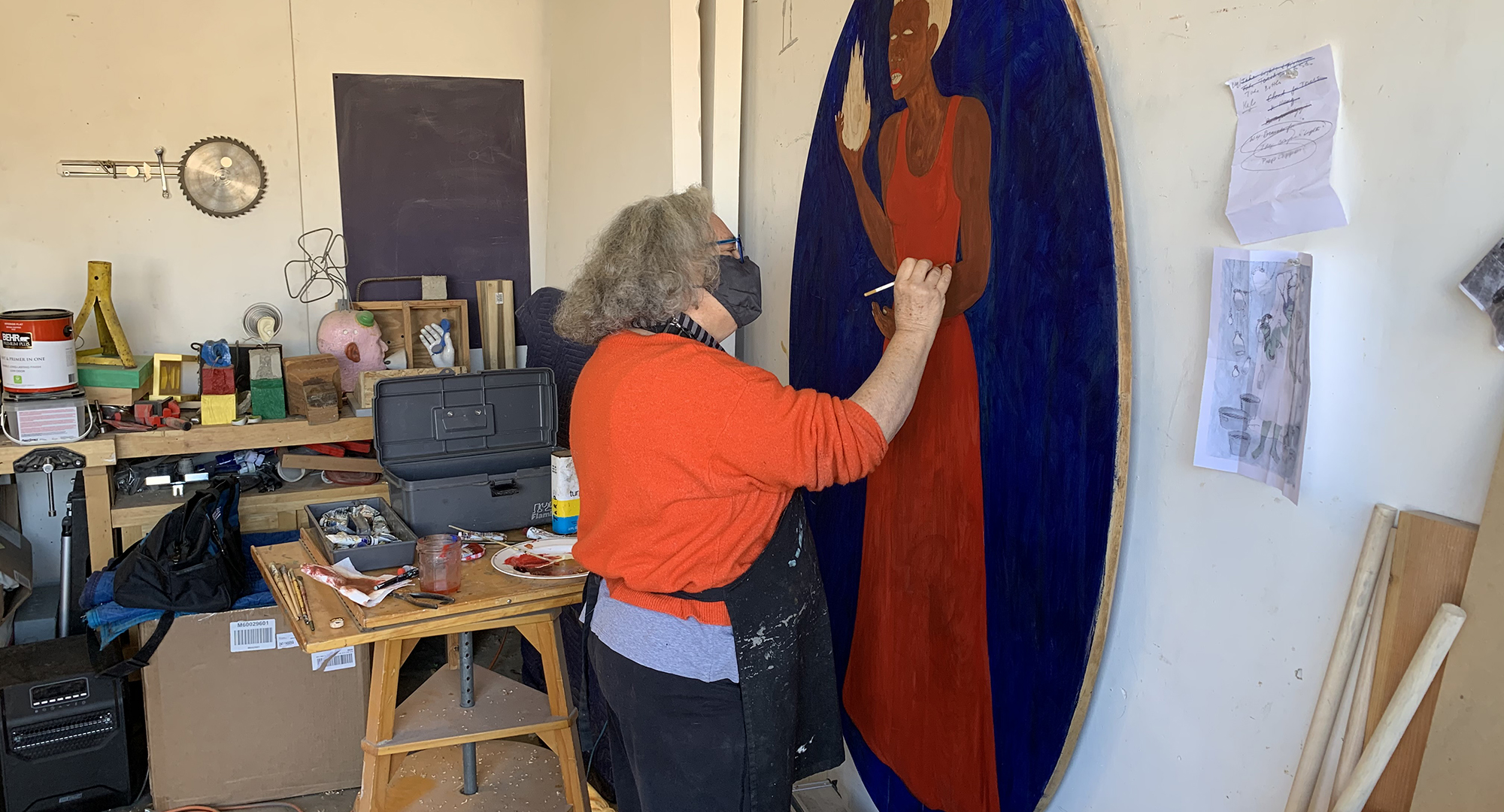 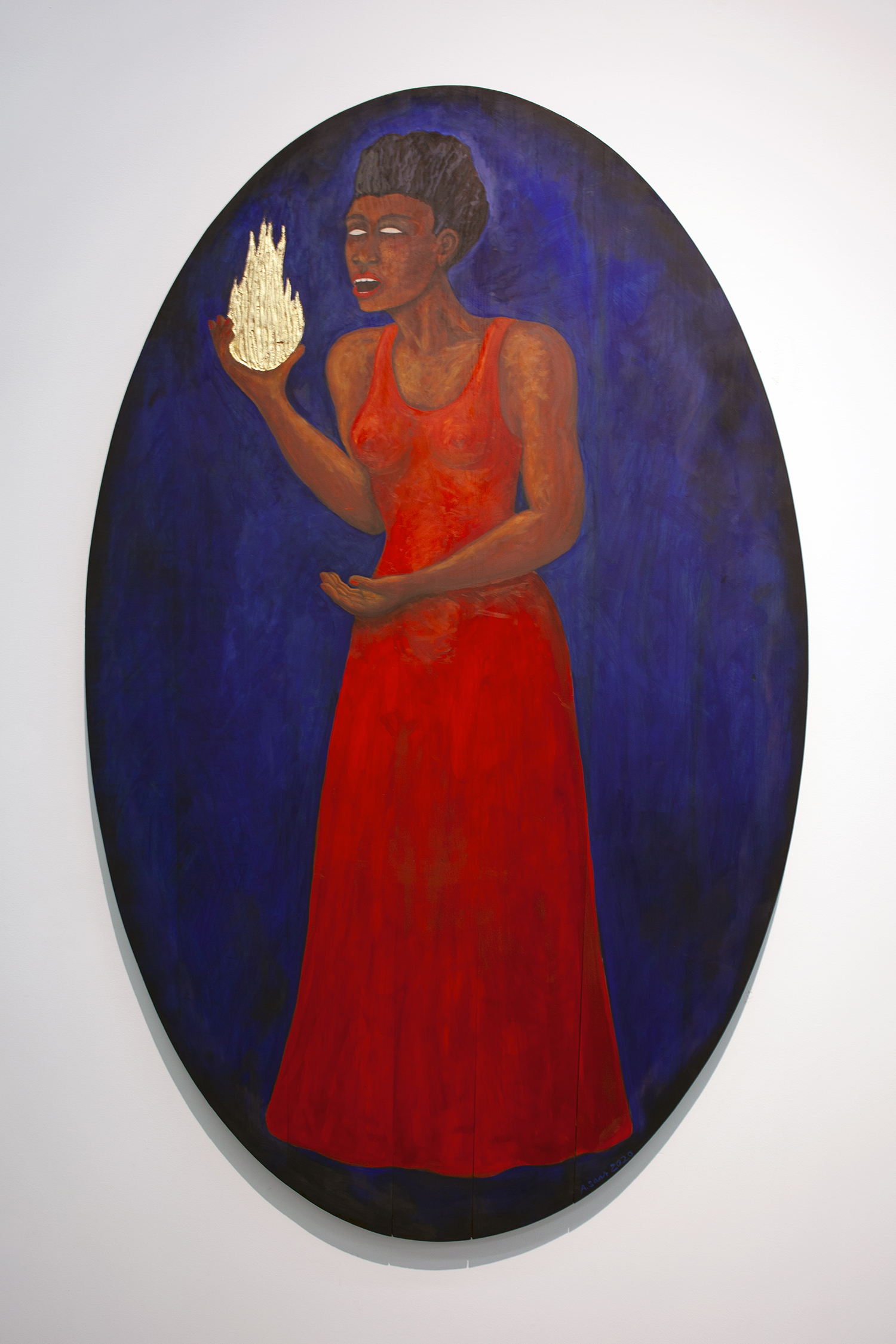 Saar also explores the parallel histories of music and protest in The Copacetic Suite. These prints bring to life the swinging heyday of Harlem’s jazz scene of the 1930s and 40s. Saar's imagined dancers, singers, musicians, and patrons float in the dreamlike spaces of jazz clubs and underground bars, where they are joined by spirits, hauntings, and haints. The suite’s vibrant primary colors simultaneously evoke the urgent rhythm of syncopation and the smooth moodiness of the blues.

The Copacetic Suite was printed at and published by Mullowney Printing in San Francisco, California. The eight prints are multi-block linocut images on Japanese handmade kozo paper. 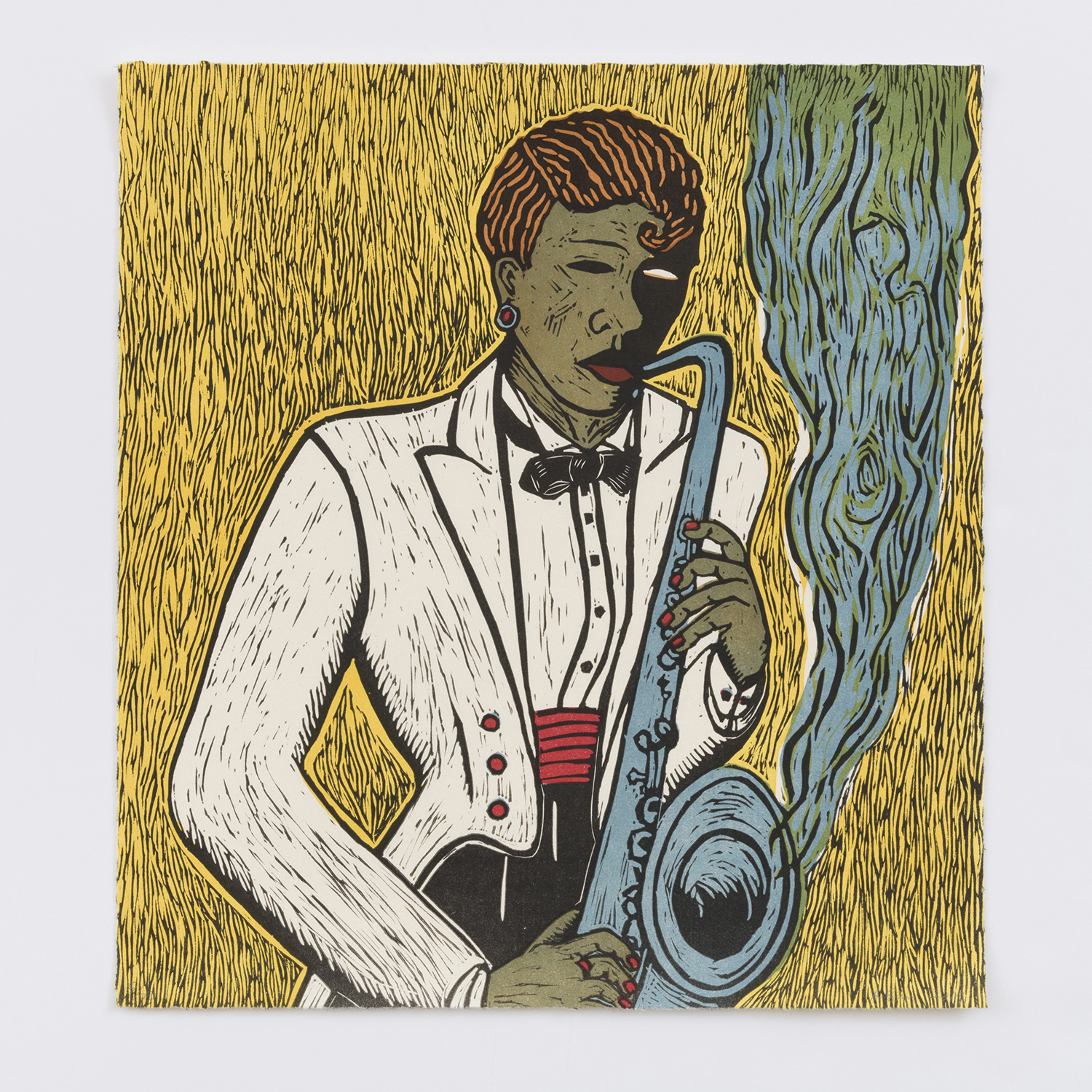 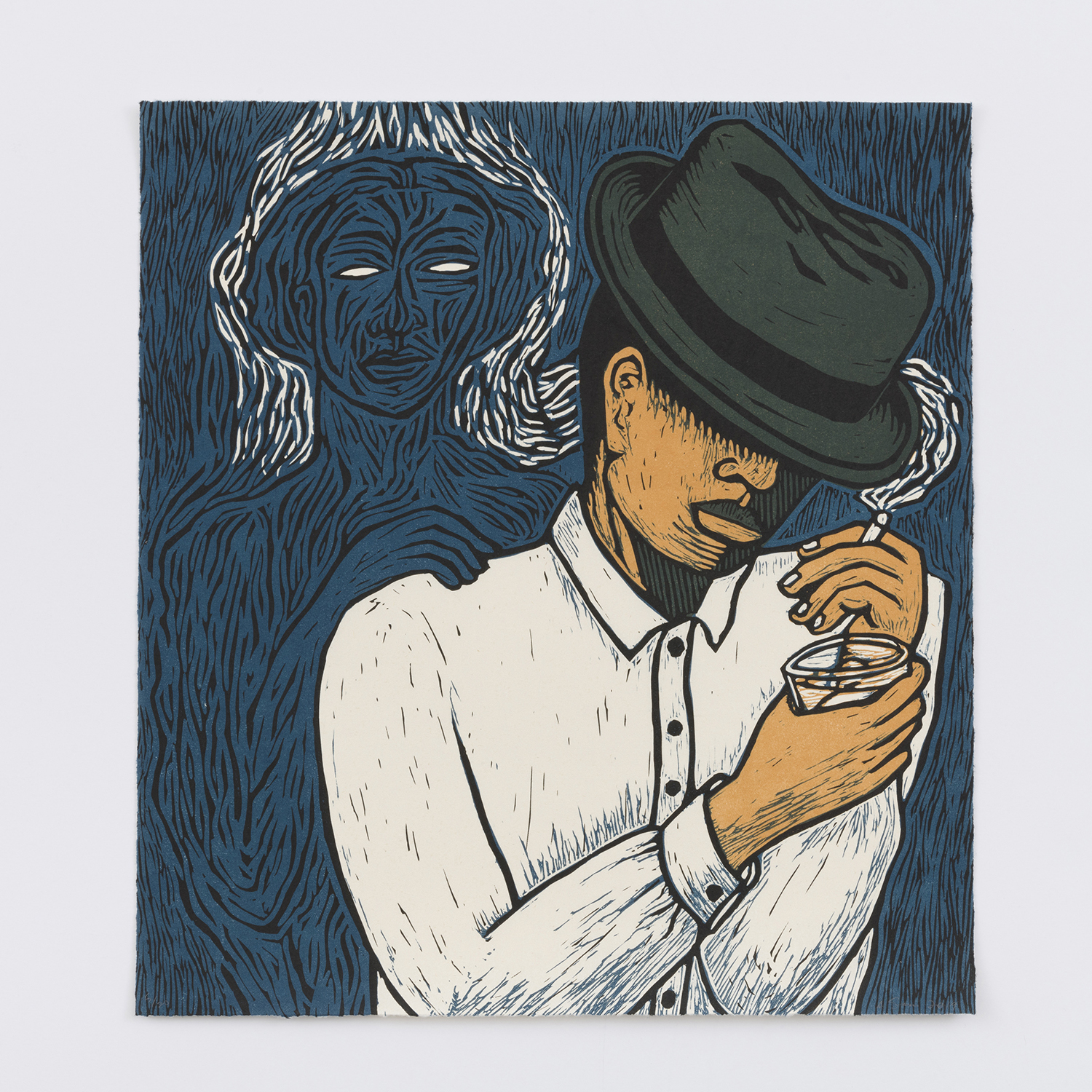 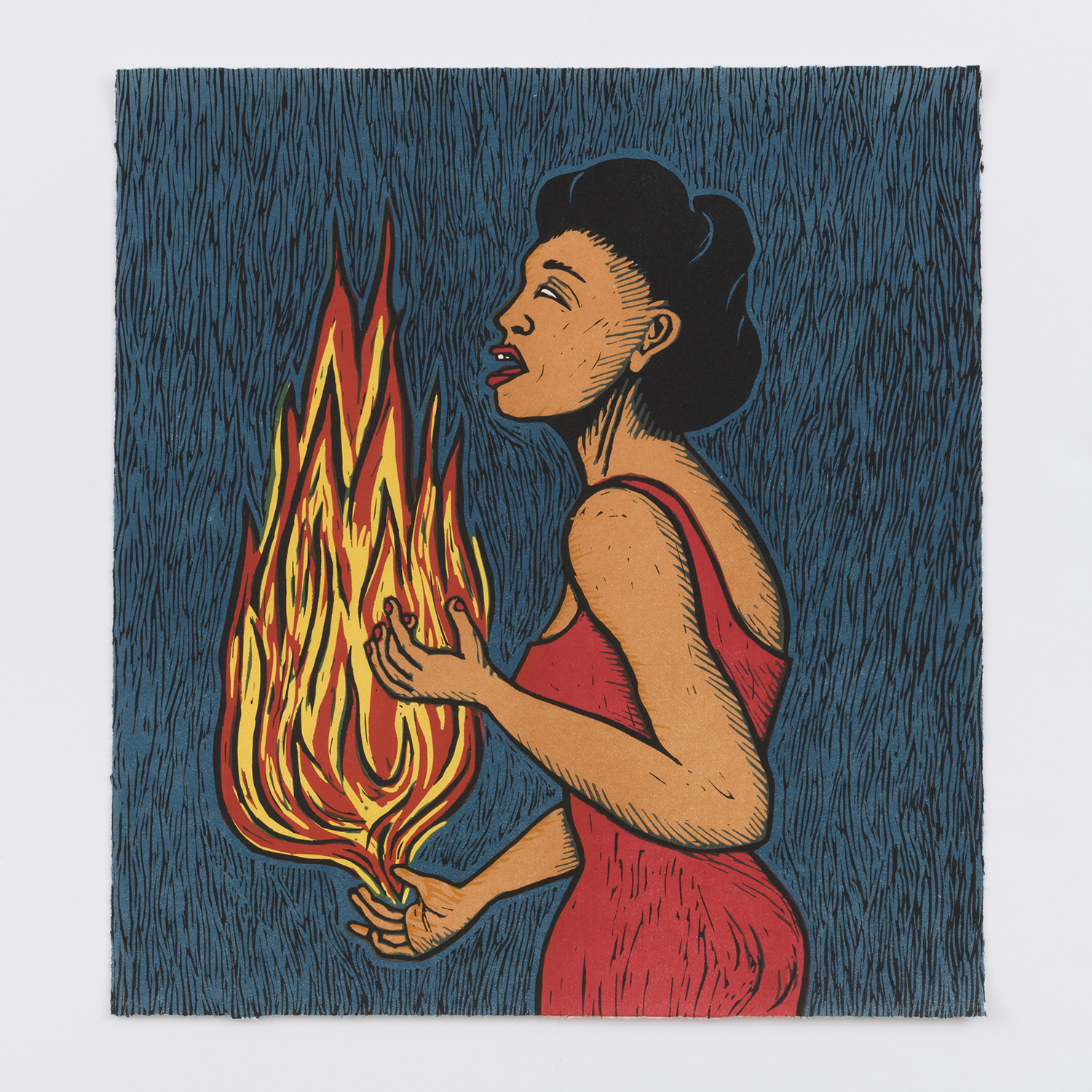 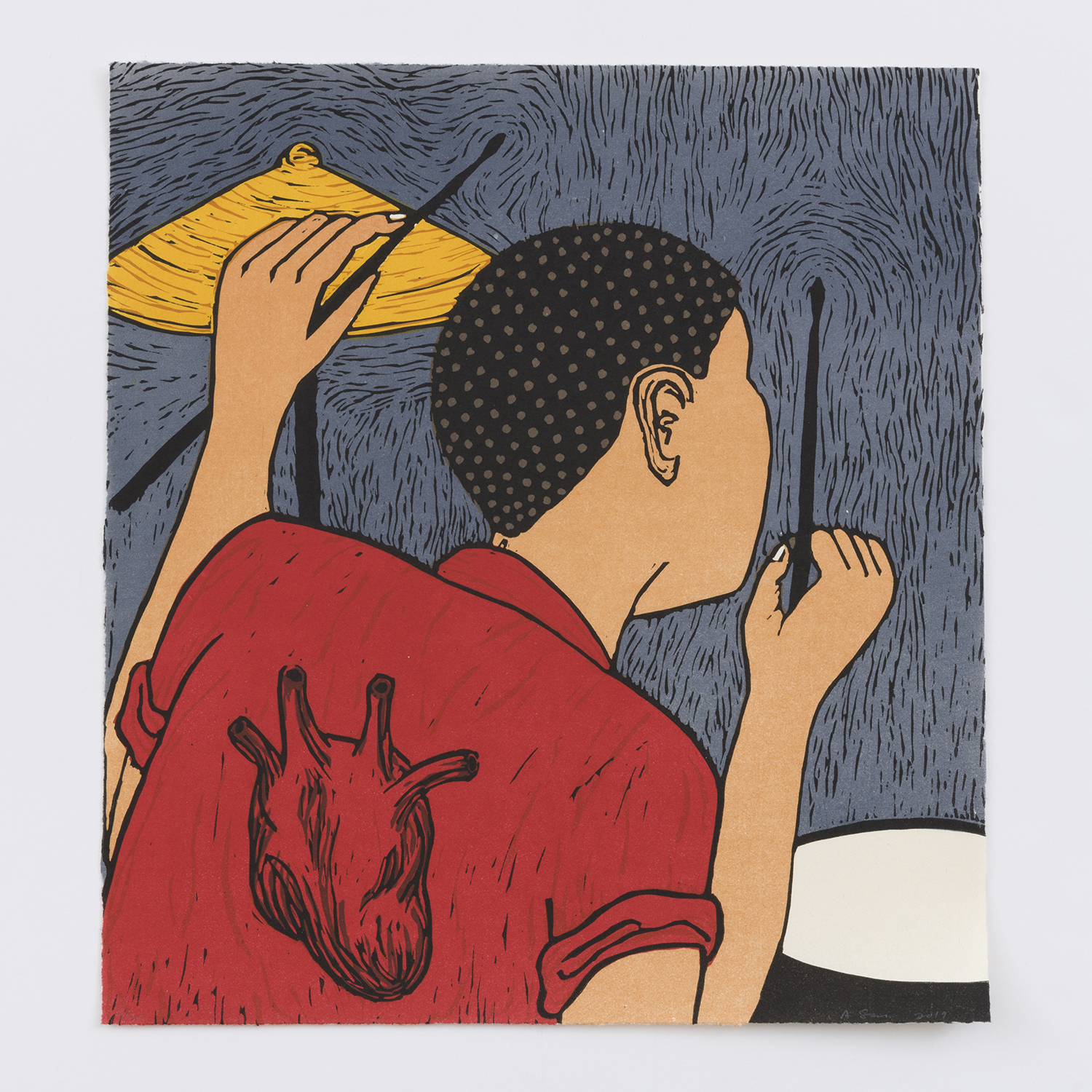 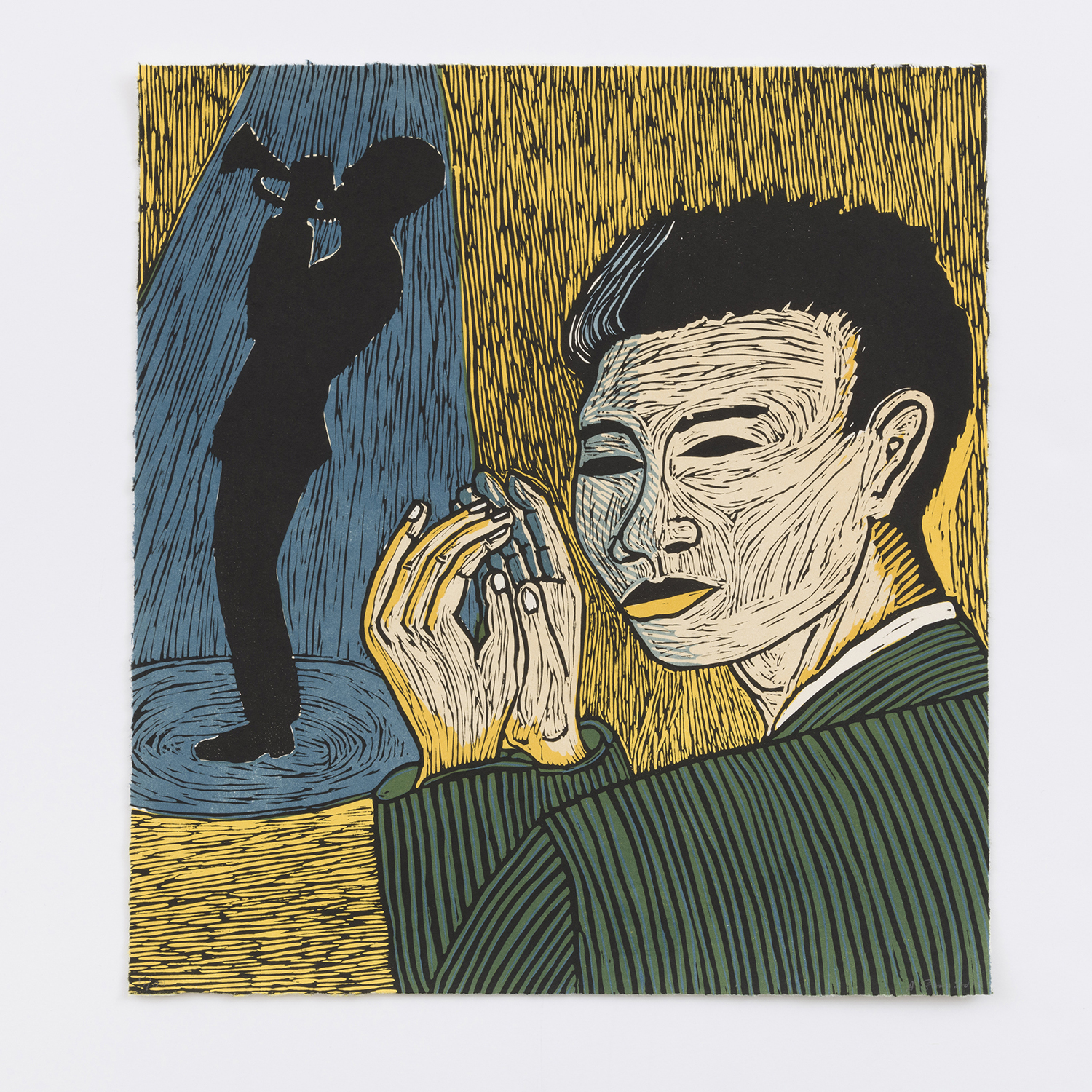 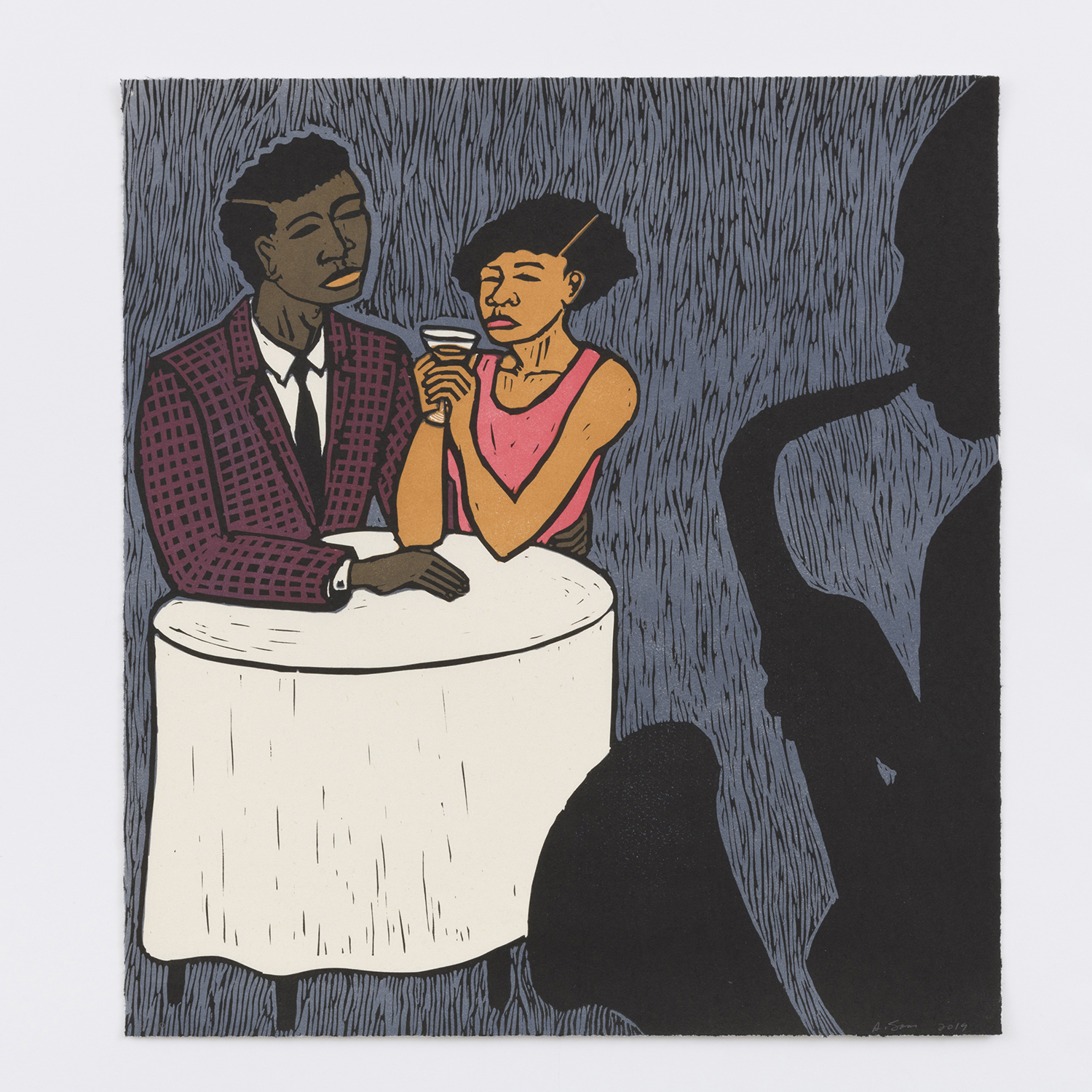 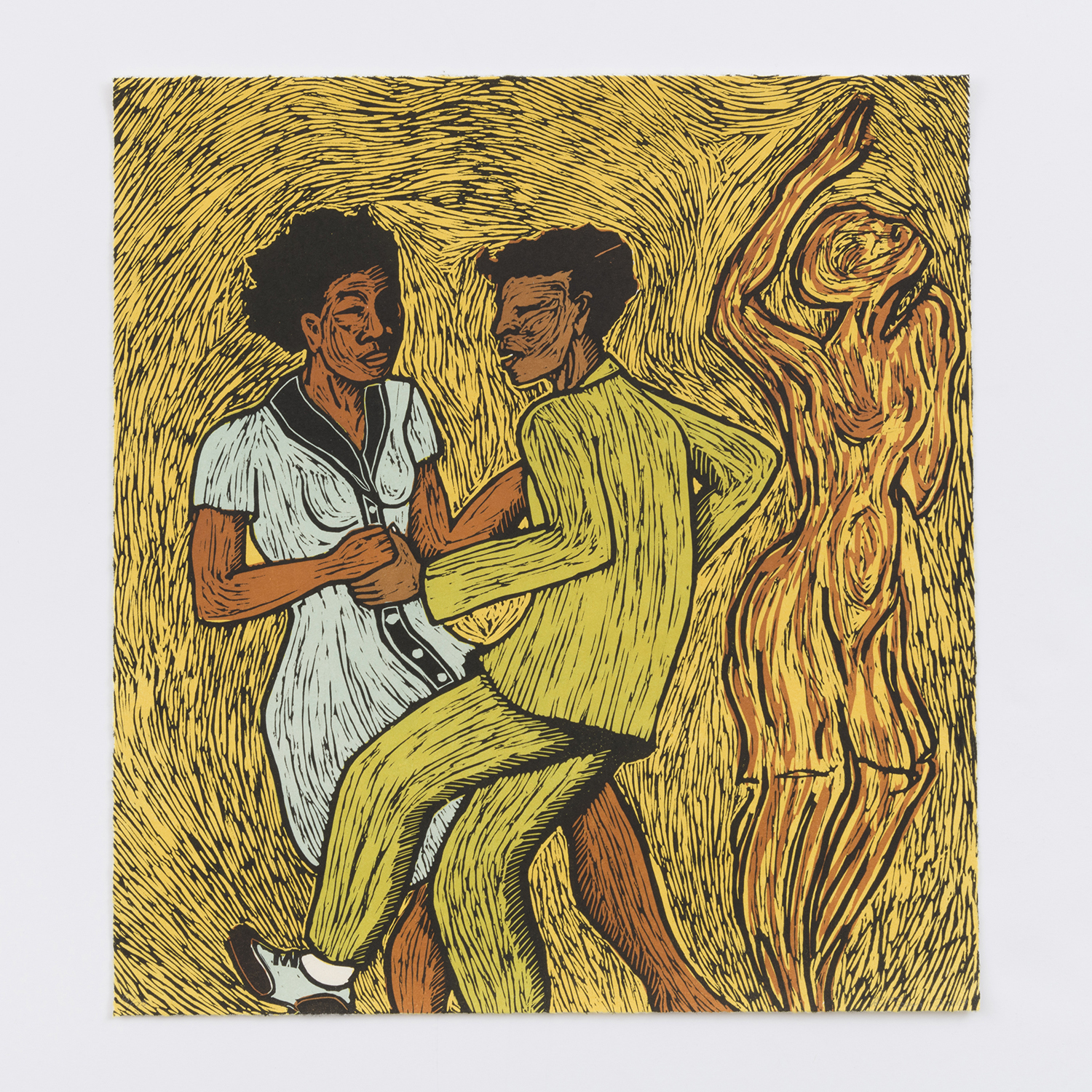 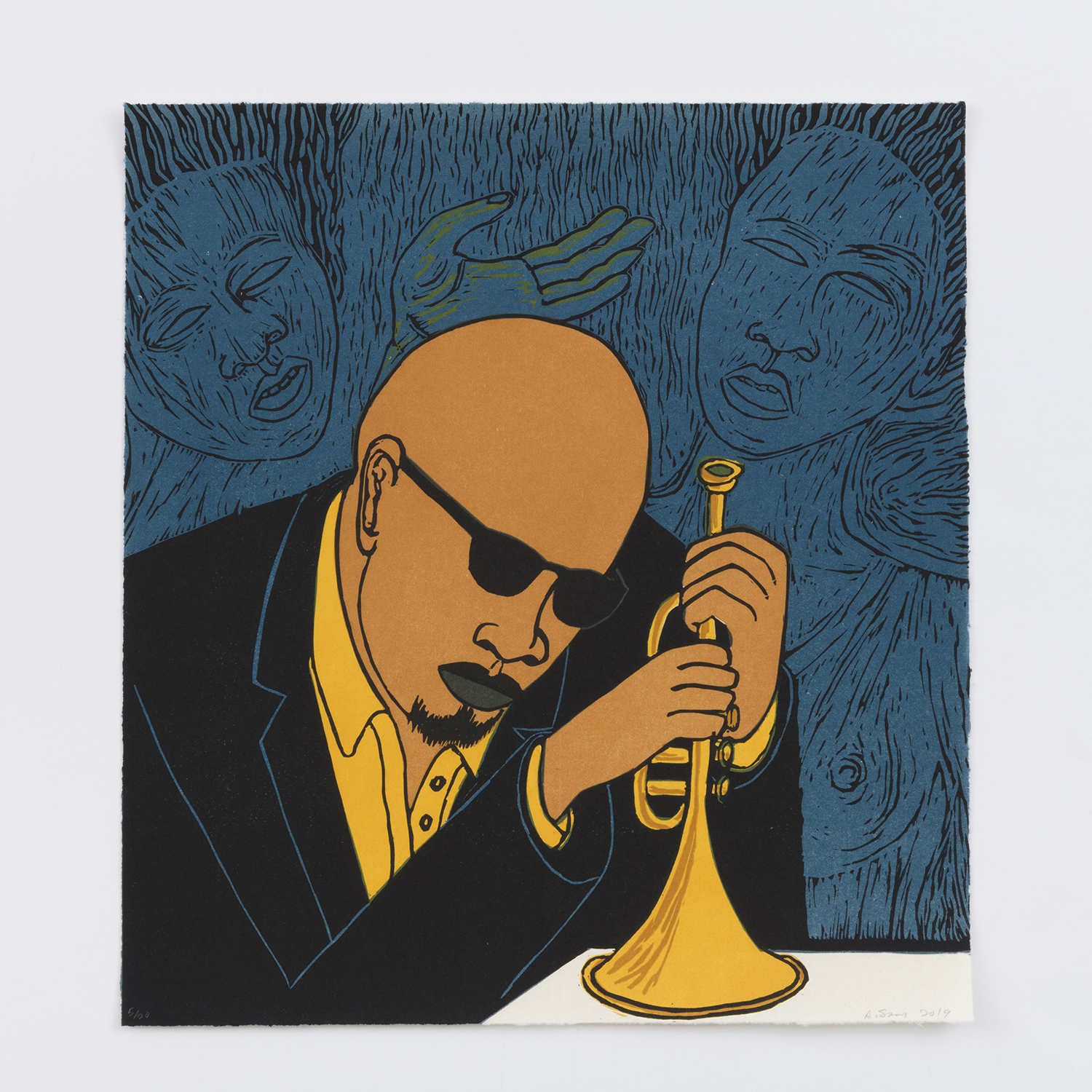 Two additions to the series will come in early 2021. The Trotters and The Queen of the 88s continue Saar’s celebration of the passions and achievements of the Jazz era. 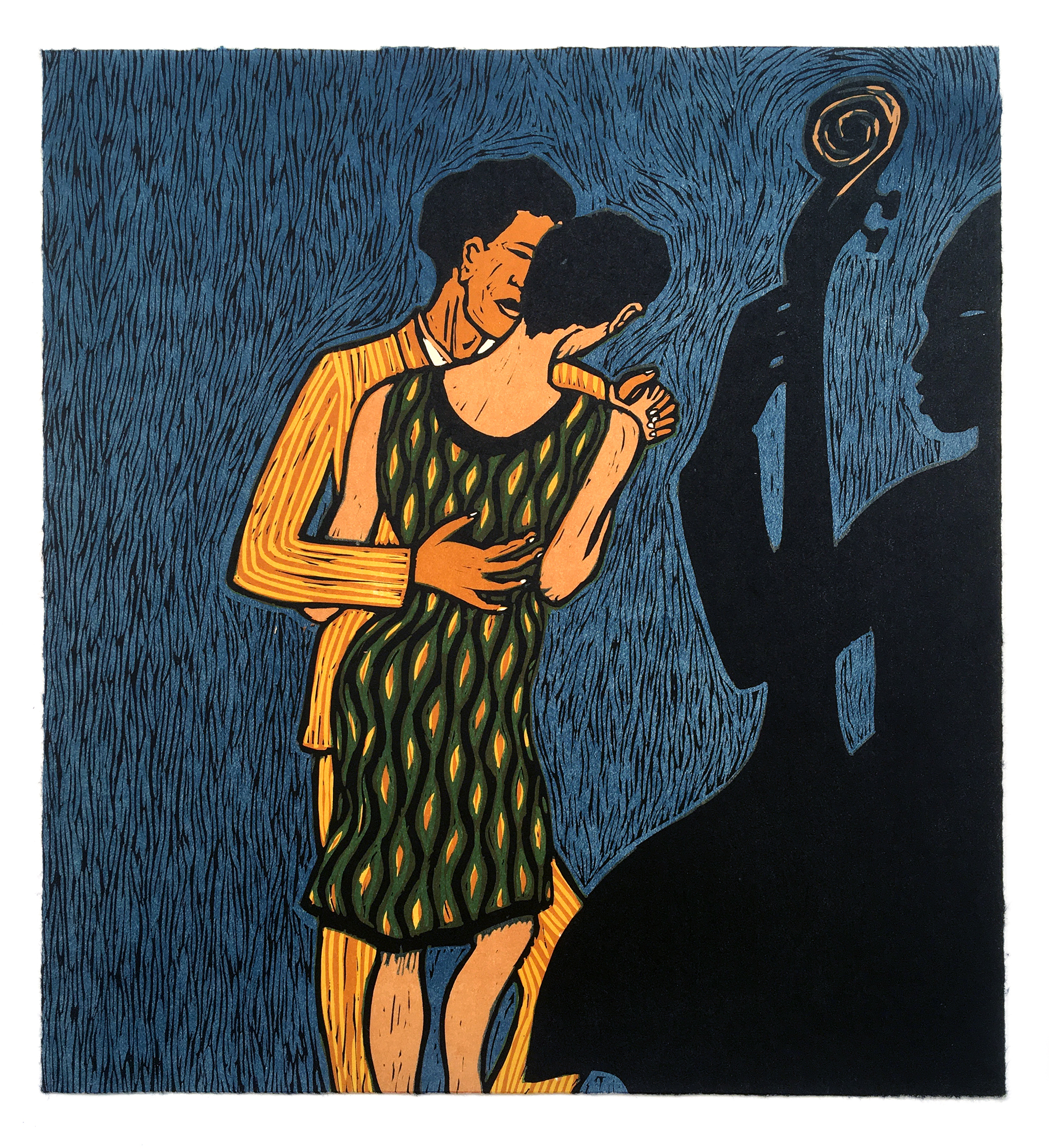 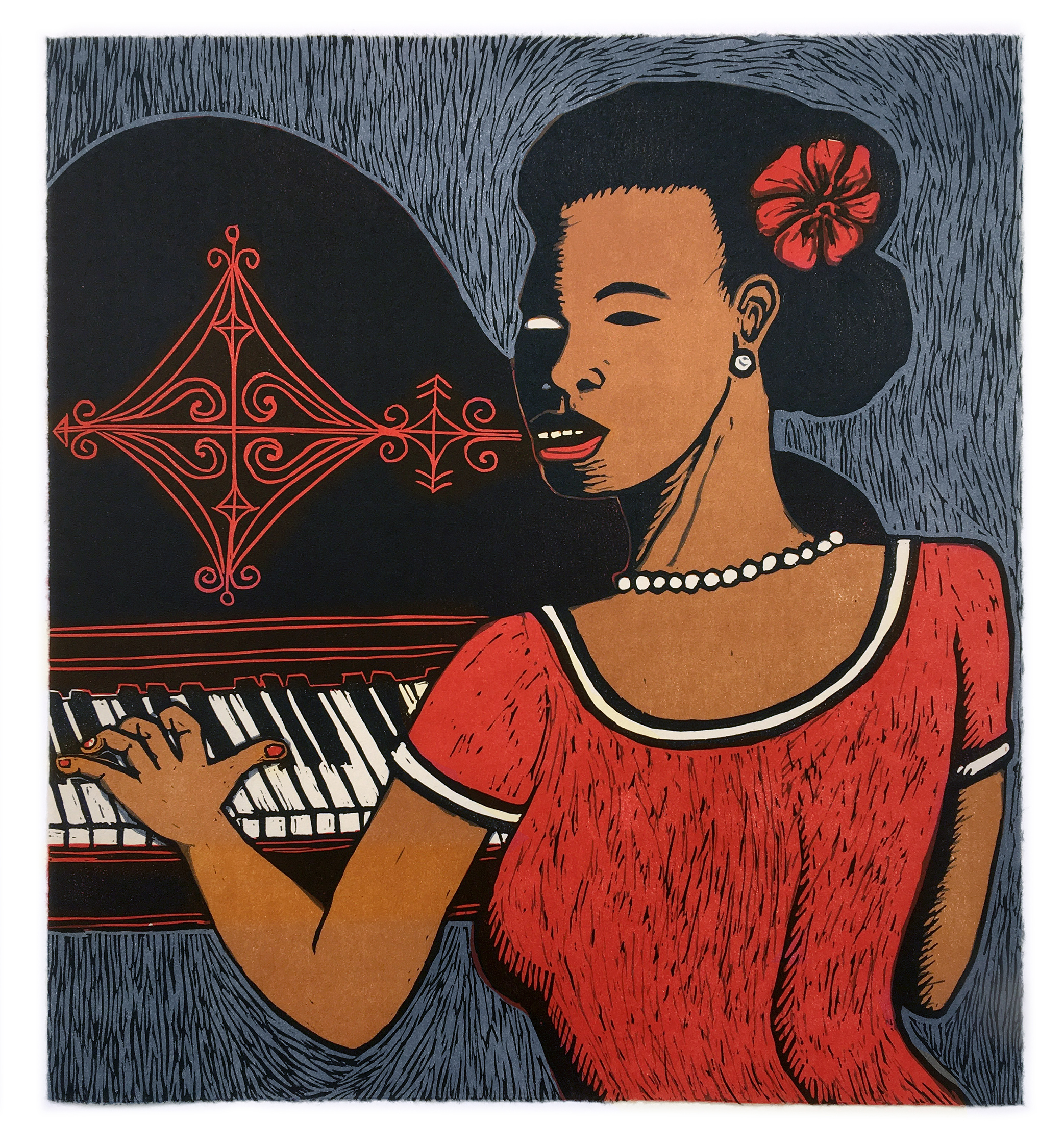 The project takes imagery in part from designs commissioned in glass by the New York City MTA for the Harlem-125th Street station platform. The commission illustrates the rich history of the Harlem Renaissance, that explosion of cultural expression from the neighborhood’s intellectuals, musicians, writers, poets, and artists in the early 20th century. 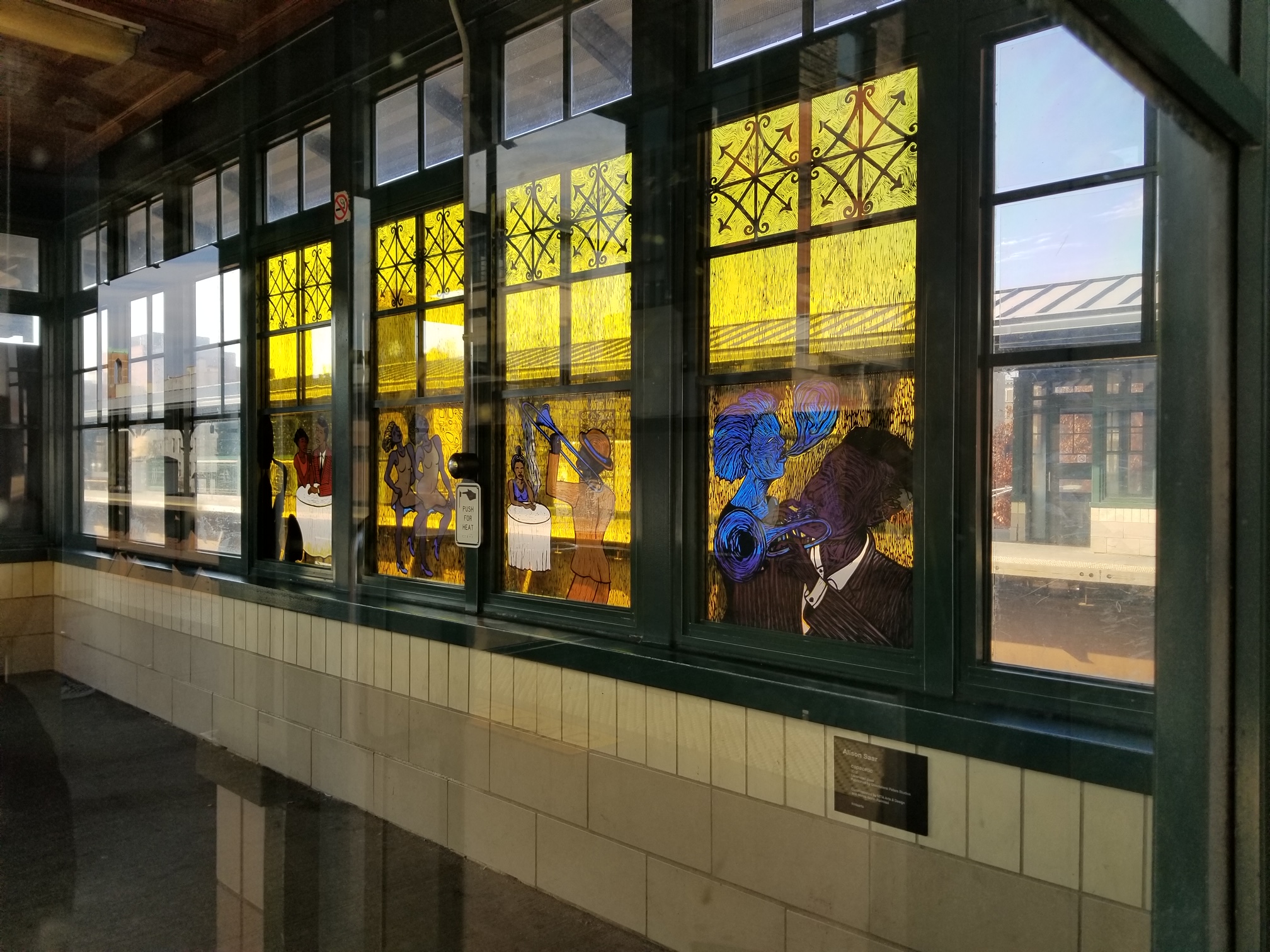