As the United States approaches one of its most divisive and consequential elections in its history, the work of the American artists Edward Kienholz and Nancy Reddin Kienholz seems ever more contemporary and prophetic. 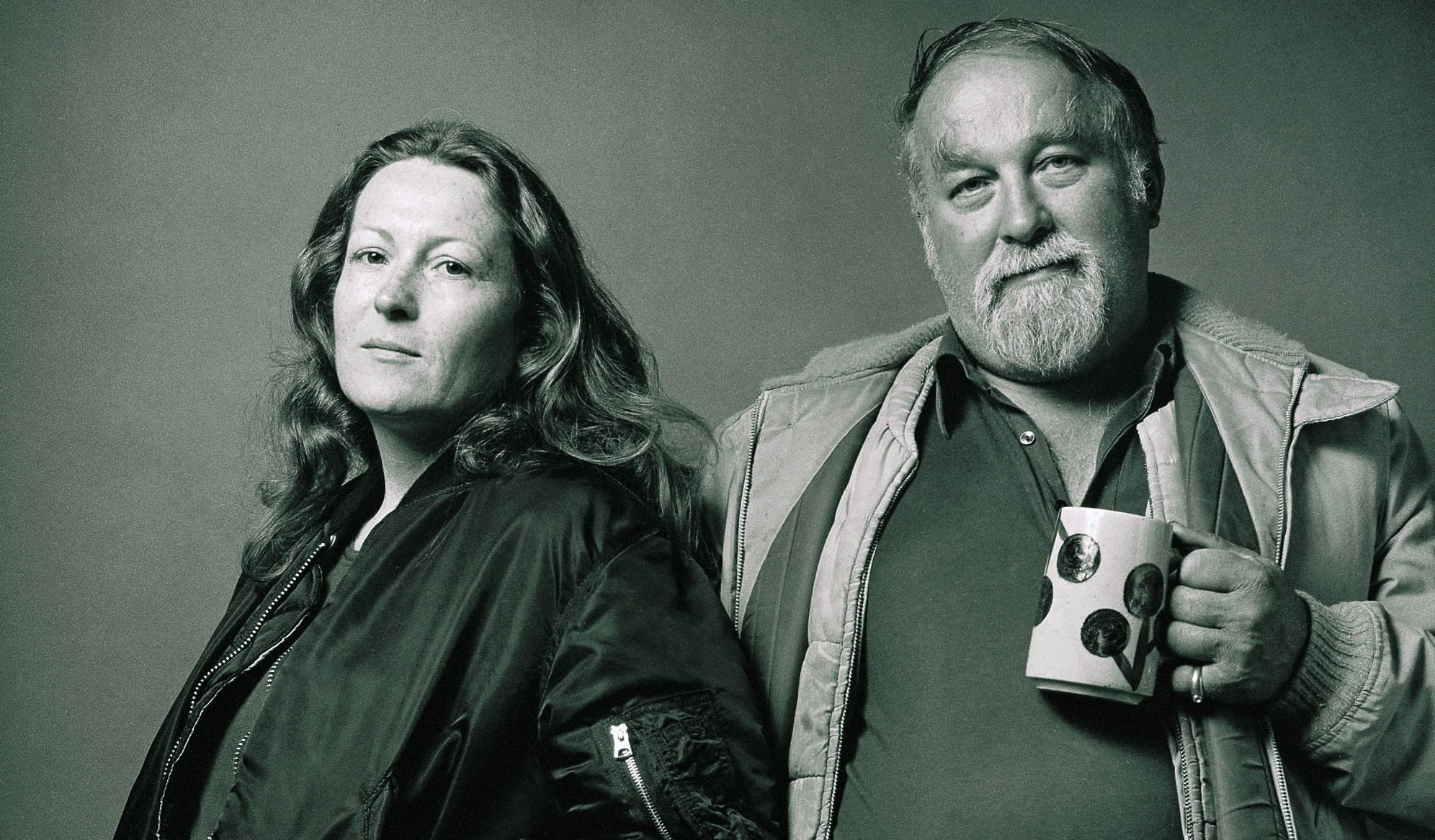 Ed and Nancy Kienholz doggedly probed the seamier side of America’s political and moral landscapes throughout their collaborative oeuvre. The Cold War, Vietnam, the Civil Rights and Women’s Liberation Movements, and 1980s Moral Majority conservatism all fell victim to the artists’ searing aesthetic wit. The latter is relevant here, with two late works that delve into the messy business of politics and justice in America.

In both My Country 'Tis of Thee and The Caddy Court, the Kienholzes refuse to allow easy answers or glossed-over explanations. Their grotesque assemblages lay bare the dark underbelly of politics and the corrupt levers of power that work to maintain the status quo, in the face of widespread movements for social and institutional change. 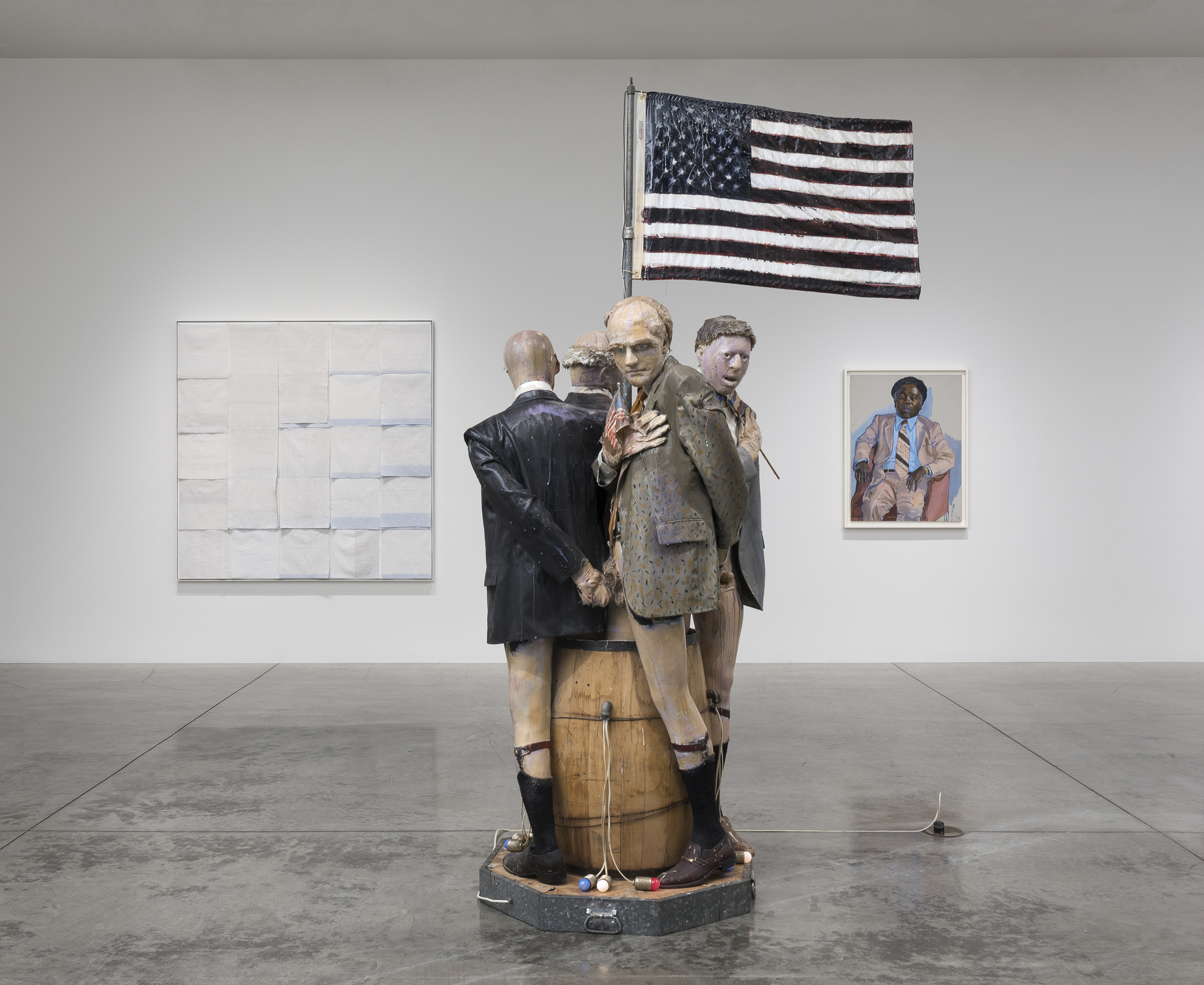 Ed and Nancy uproariously send up political collusion and misconduct in their standalone assemblage, My Country ’Tis of Thee (1991). Four half-naked politicians jingoistically pledge allegiance, while caught symbiotically glad-handing each other around a barrel. The scene — a caricature embodying the Kienholzes’ sentiments toward real-life corruption — is obscene and absurd, as an American flag proudly streams above and red, white and blue lights jauntily illuminate their willing caucus. 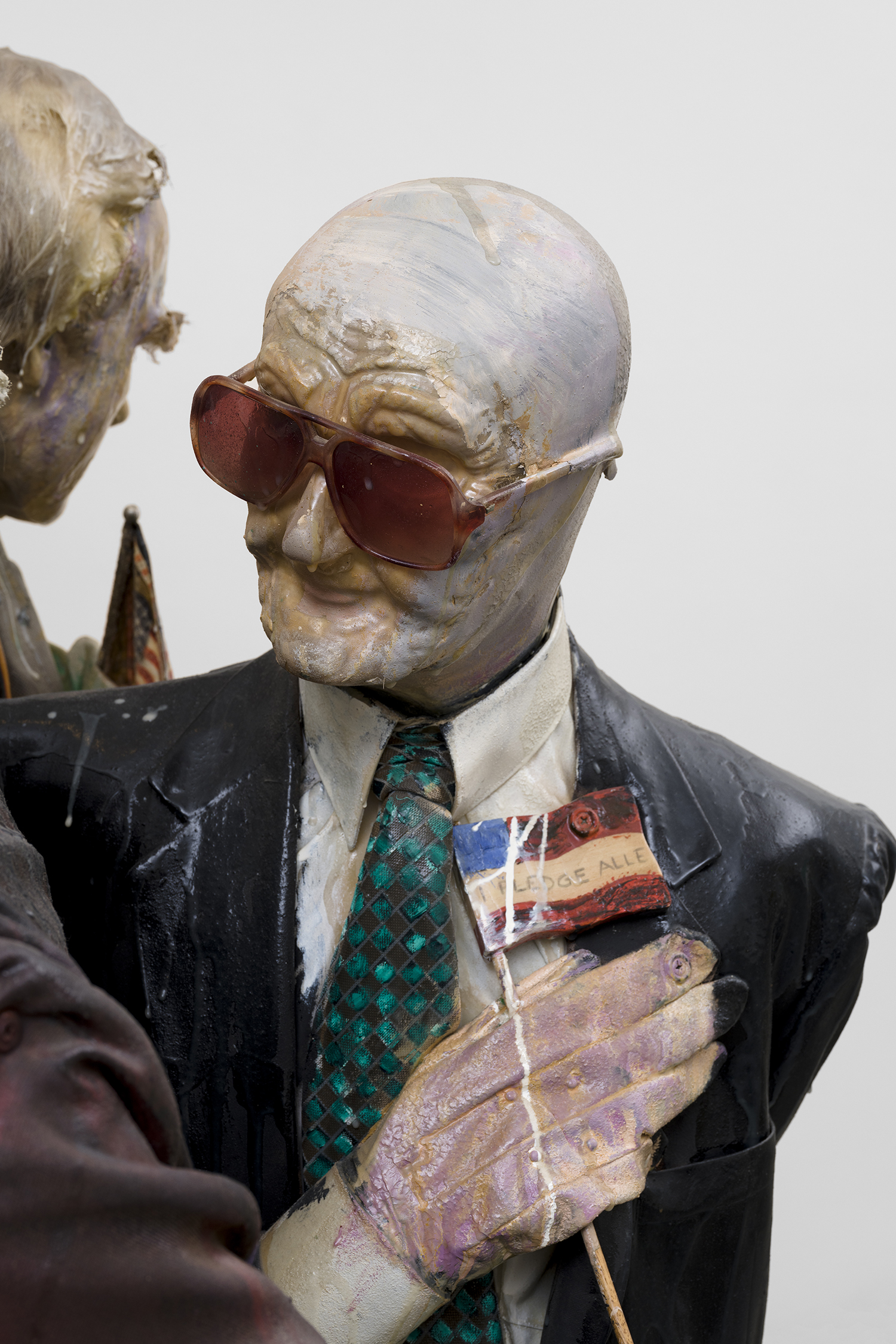 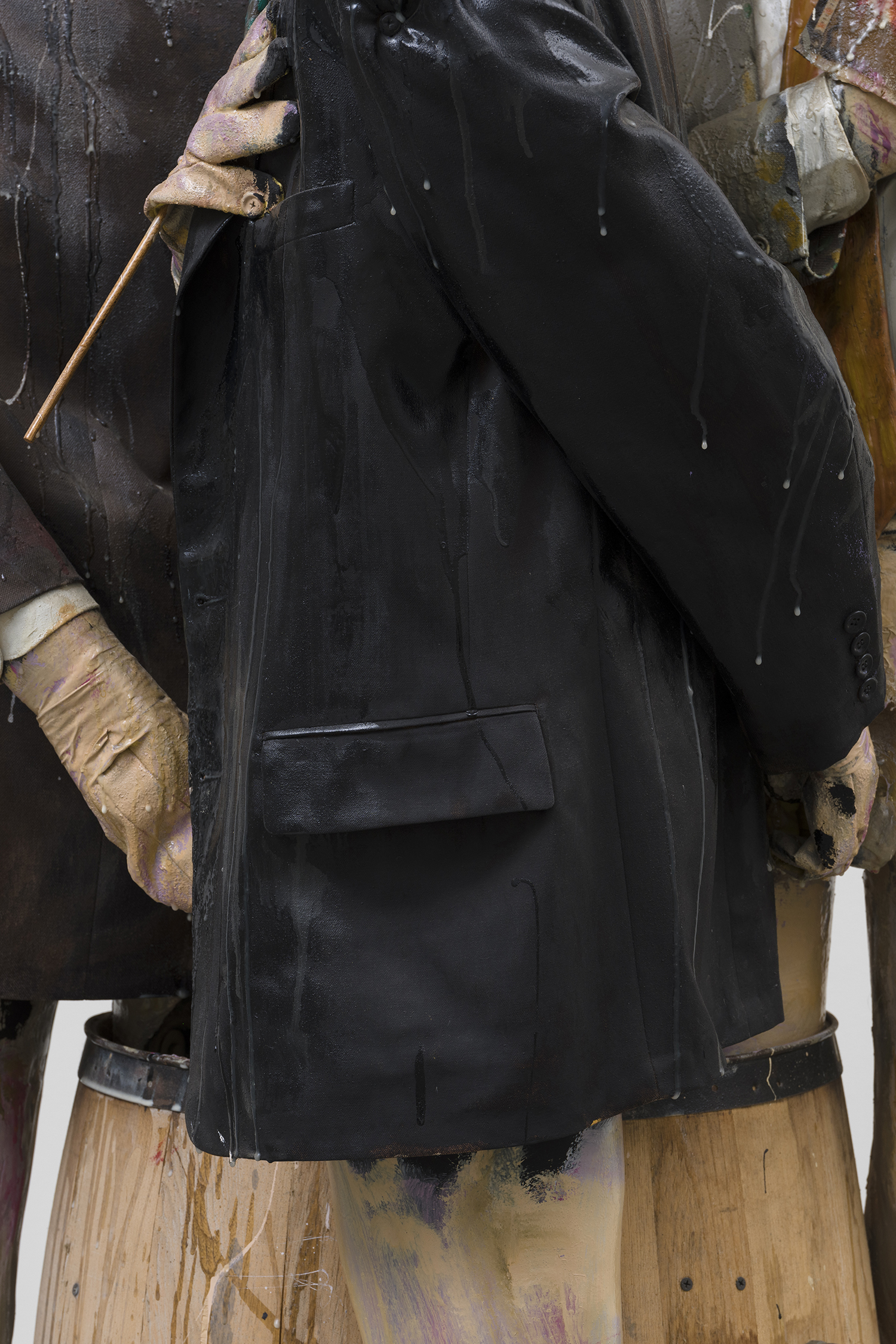 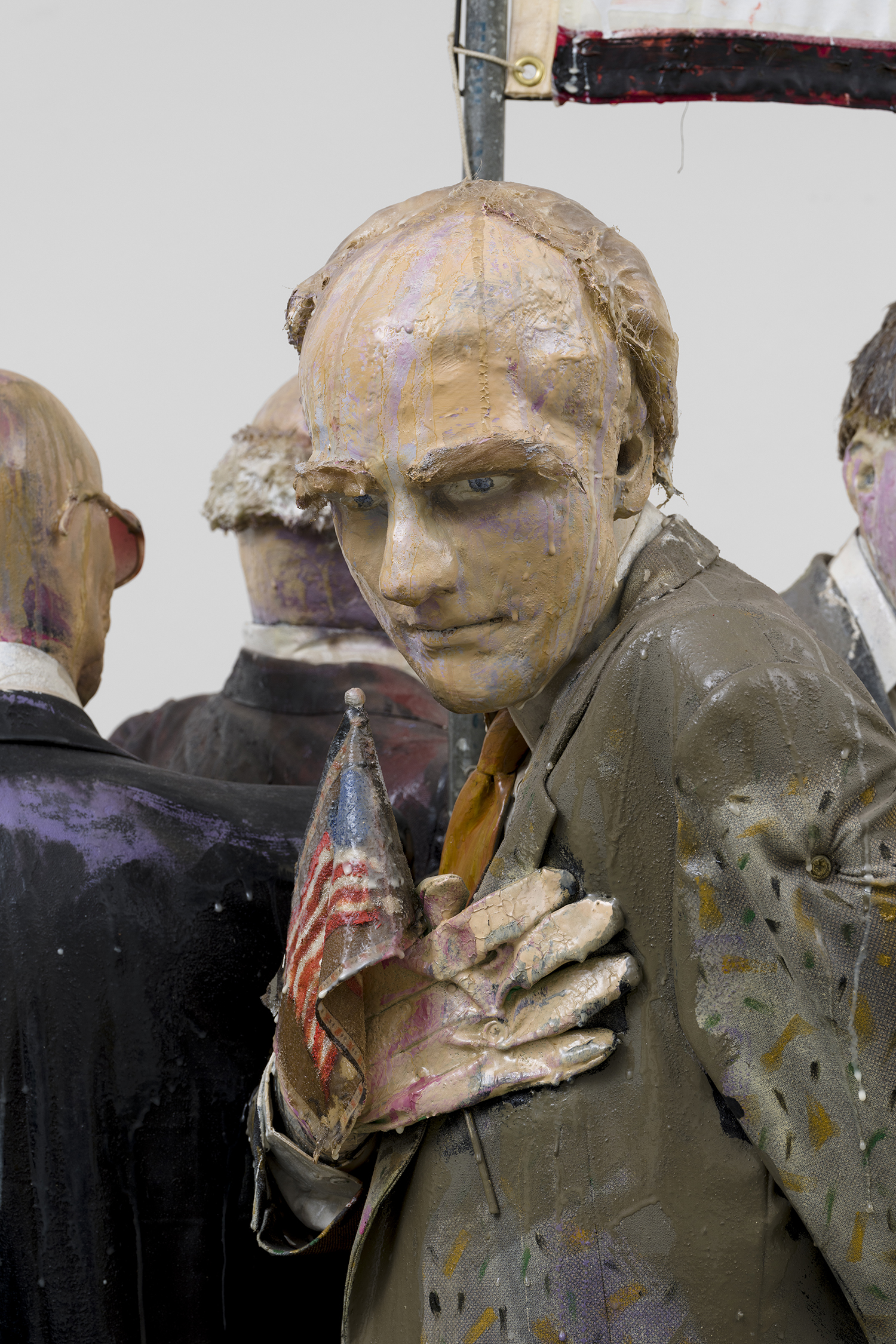 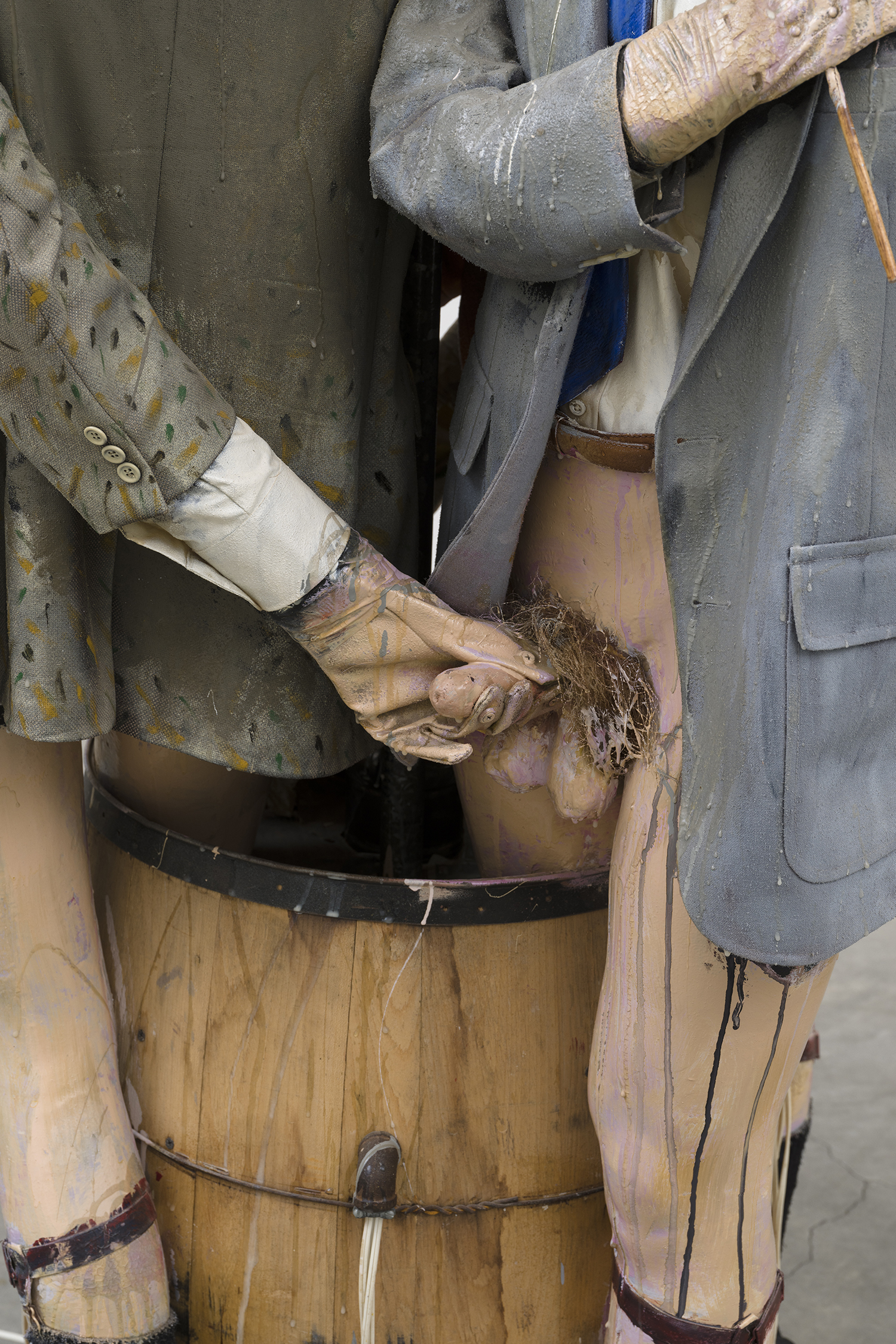 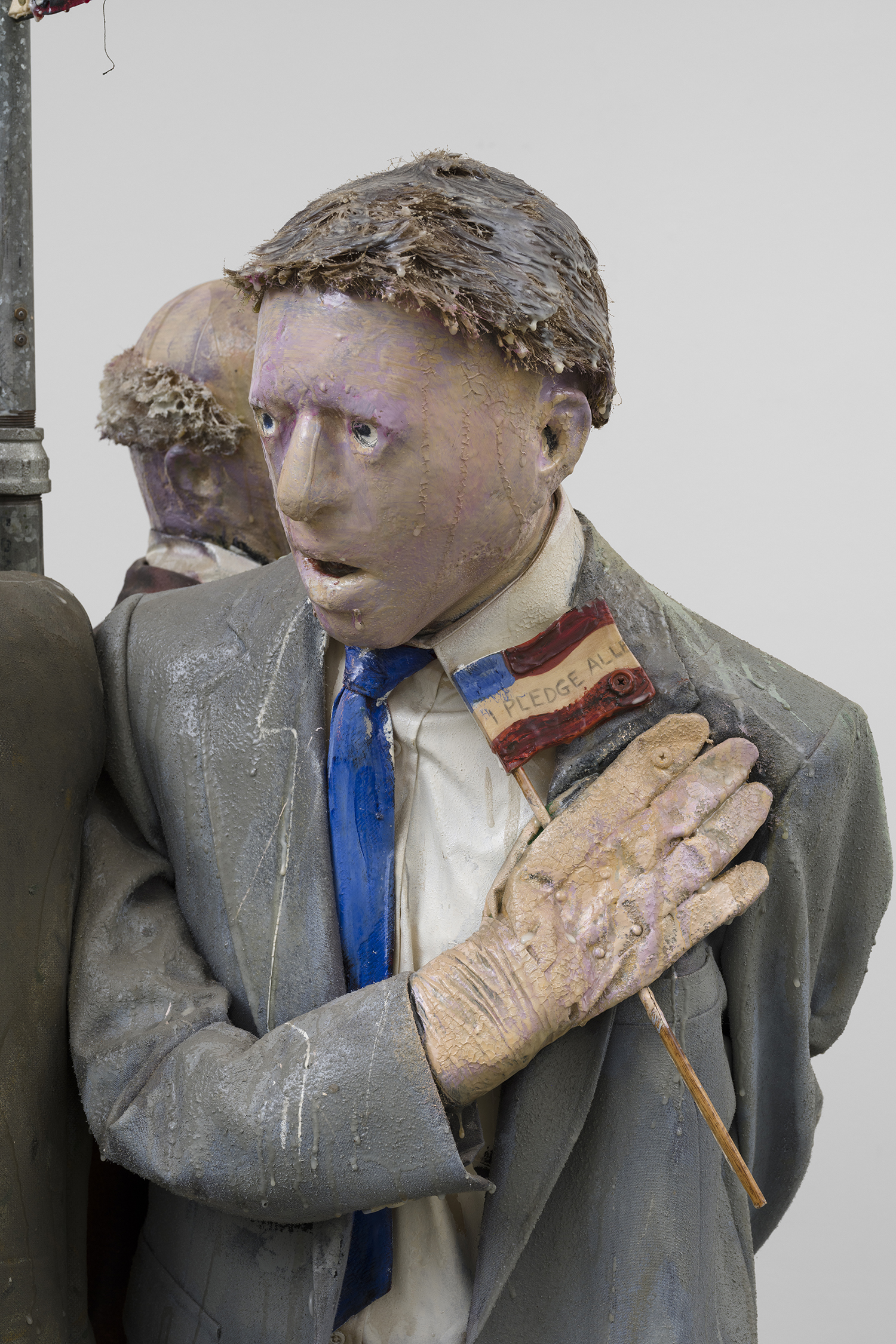 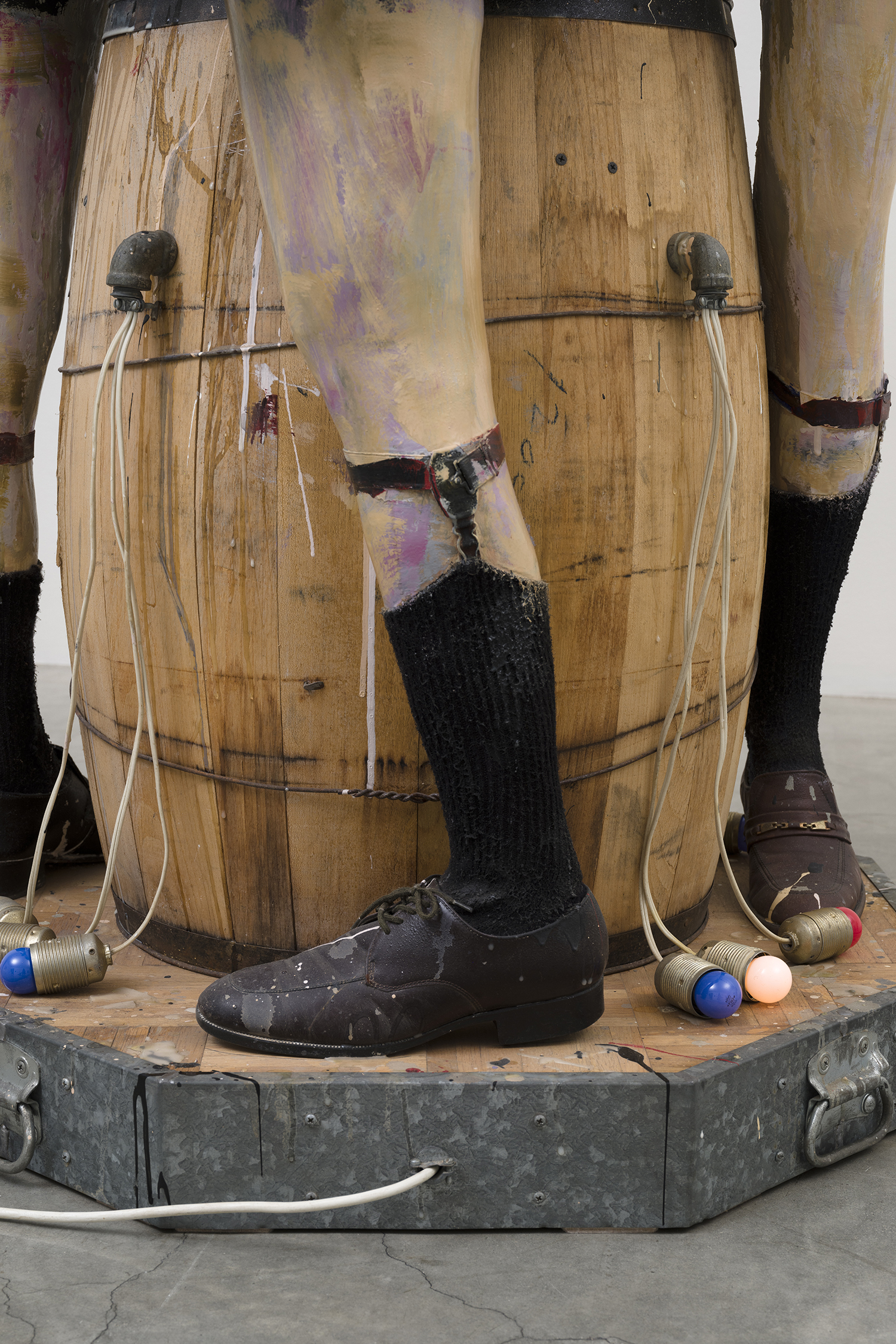 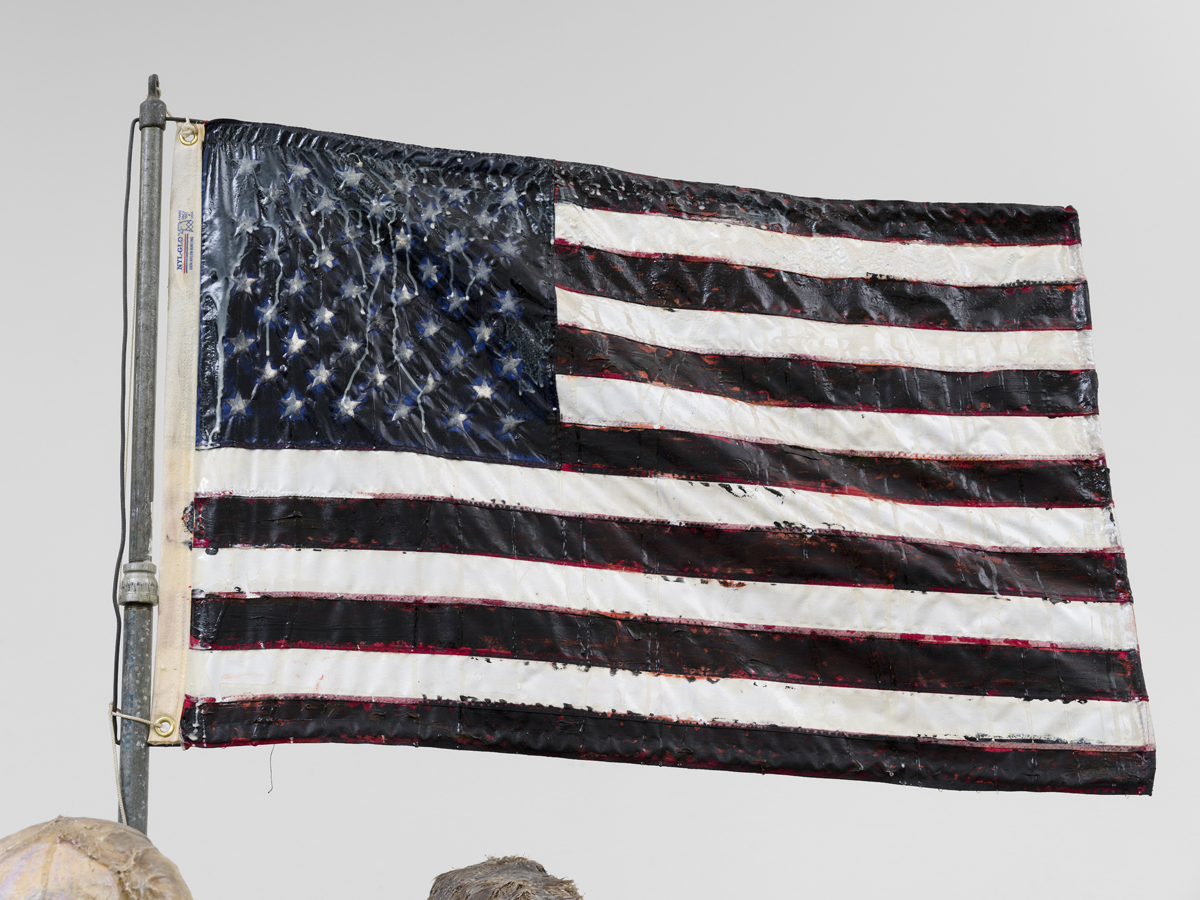 "The raw quality of Kienholz’s work at times can come across as ham-fisted and overwrought, even filled with cliché, and thus can obscure our reading. Kienholz’s America is not Rauschenberg’s America, though the two artists — who were born within two years of each other — share many qualities. And, while a comparison with Rauschenberg is unfair for any artist, and Kienholz’s output is smaller and less varied, what lies within is certainly darker and nastier. At its best, his art is a blueprint for a particularly American aesthetic that has been seen since in such important artists as his peers Bruce Conner, Bruce Nauman, ASCO, Paul McCarthy, Mike Kelley, Robert Gober, Cady Noland, Glenn Ligon and, perhaps most explicitly, Kara Walker. Time art critic Robert Hughes wrote: 'Kienholz didn’t believe in refinement. What he believed in was a combination of technical know-how, moral anger and all-American yawp.' 'Few artists have hammered away at America’s ugliness as relentlessly as Kienholz.'"
- Franklin Sirmans, Flash Art, 2015﻿ 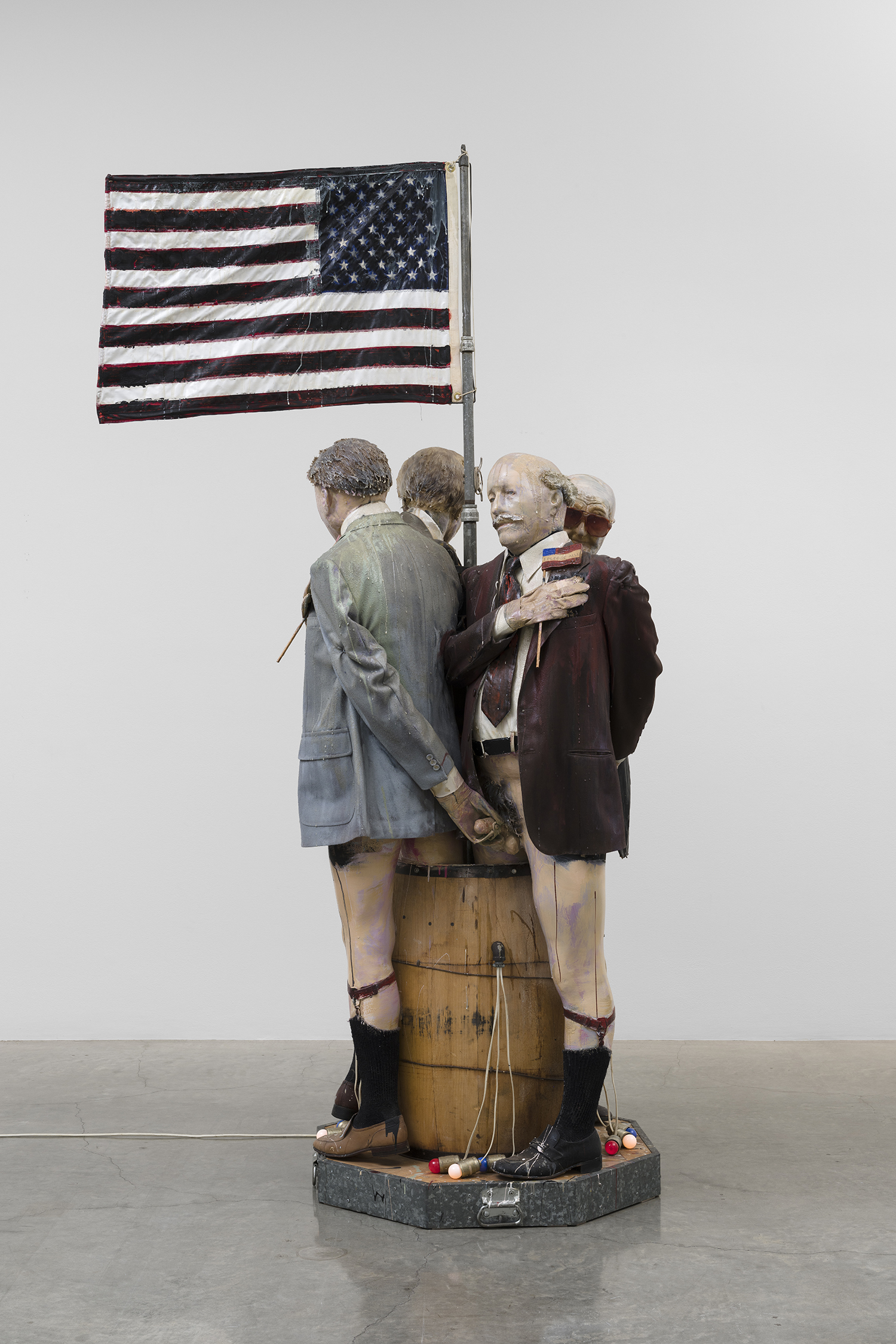 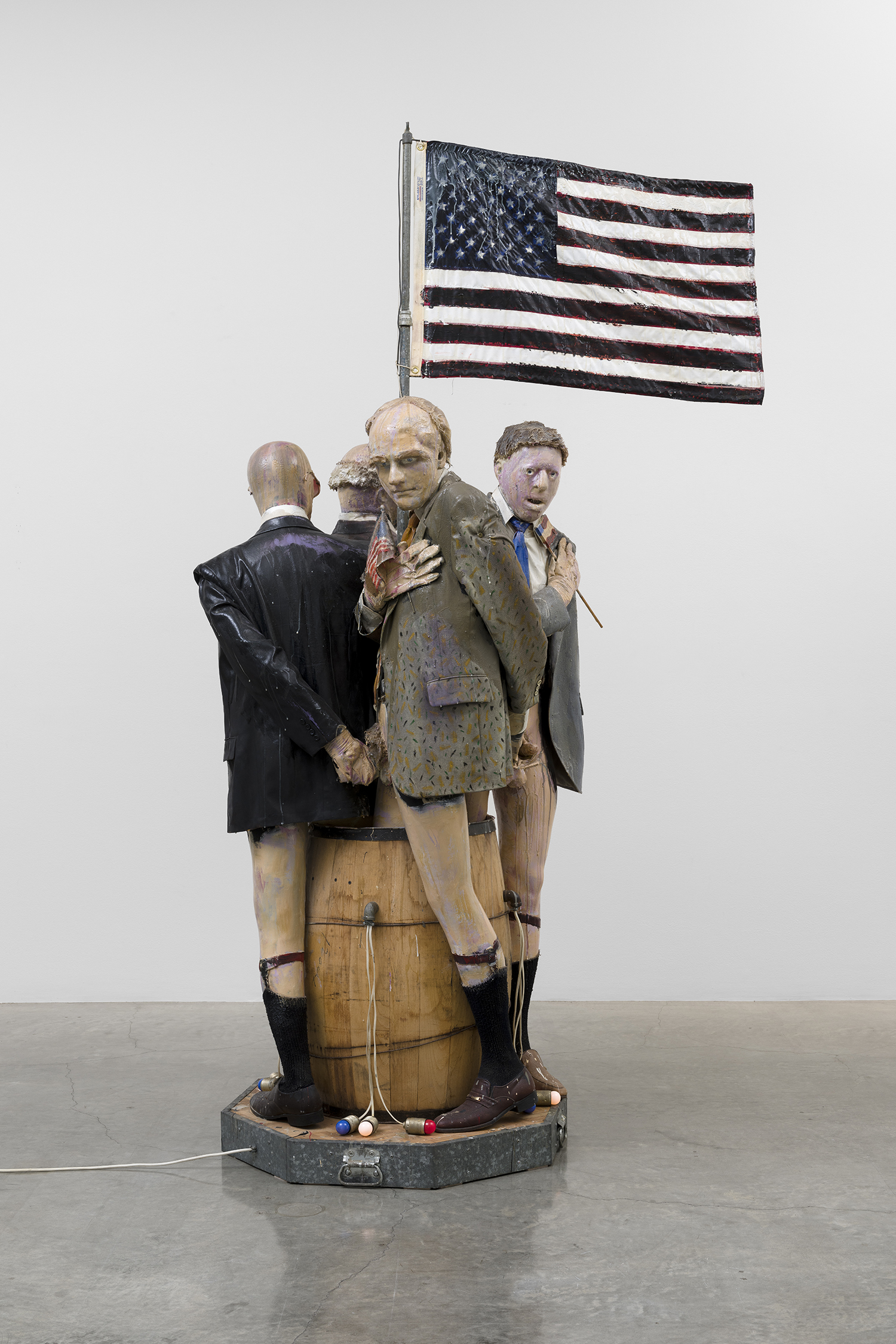 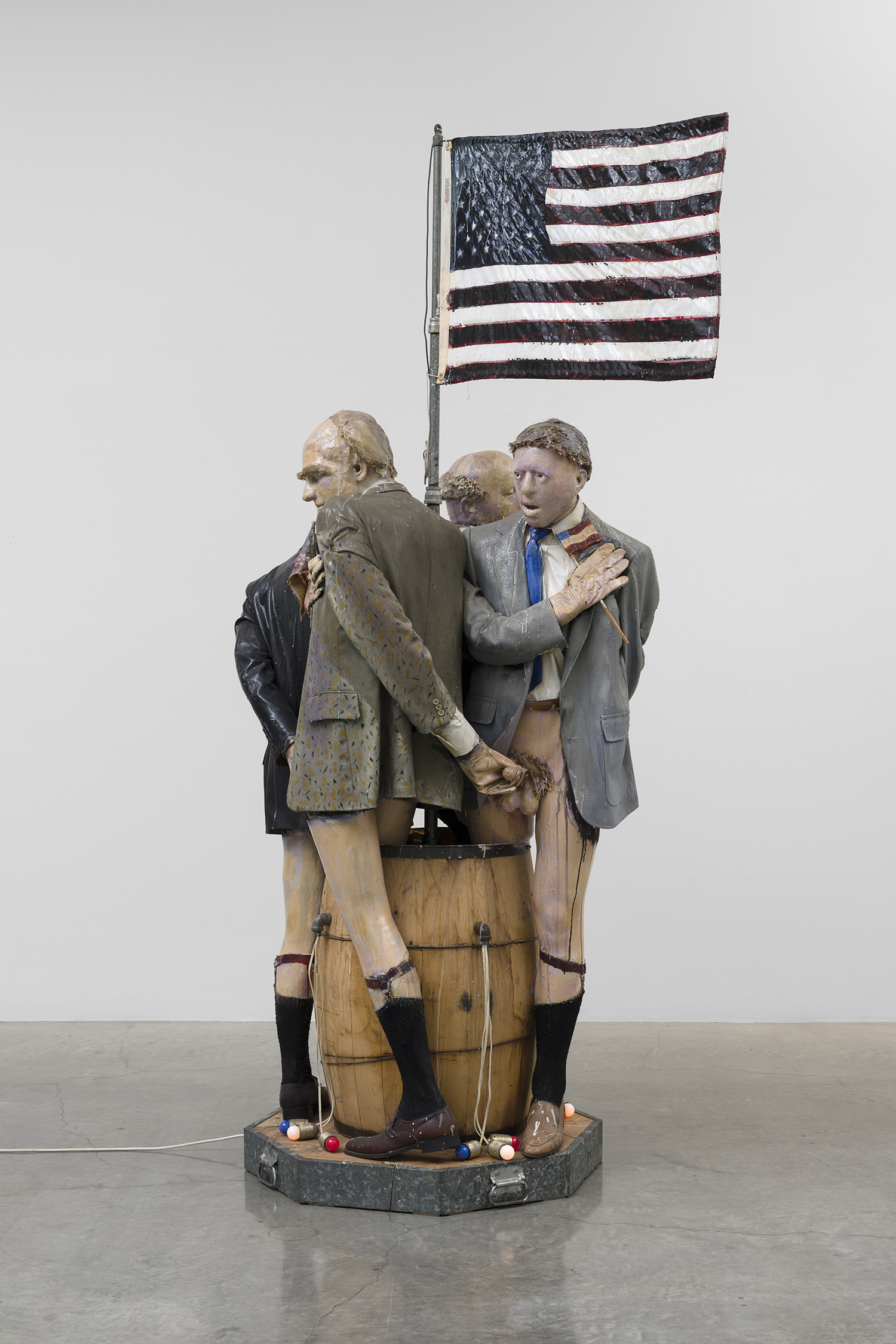 Recently on view in The Armory Show’s 2020 Town Square, the Kienholzes’ large-scale mixed media tableau The Caddy Court (1986-87) reimagines the Supreme Court of the United States in one of its original functions as a “riding circuit” court. The artists conceived of the work as a road-worthy vehicle, which could literally be driven across the country to be exhibited and “preside” from state to state, and town to town. “The Caddy Court is quite large, incredibly detailed, and both seductive and repugnant in its form and material choice,” said Anne Ellegood, curator of The Armory Show's Platform presentation. “It asks tough questions about the state of American democracy and what kind of country we want to live in.” (Artsy, 2020) 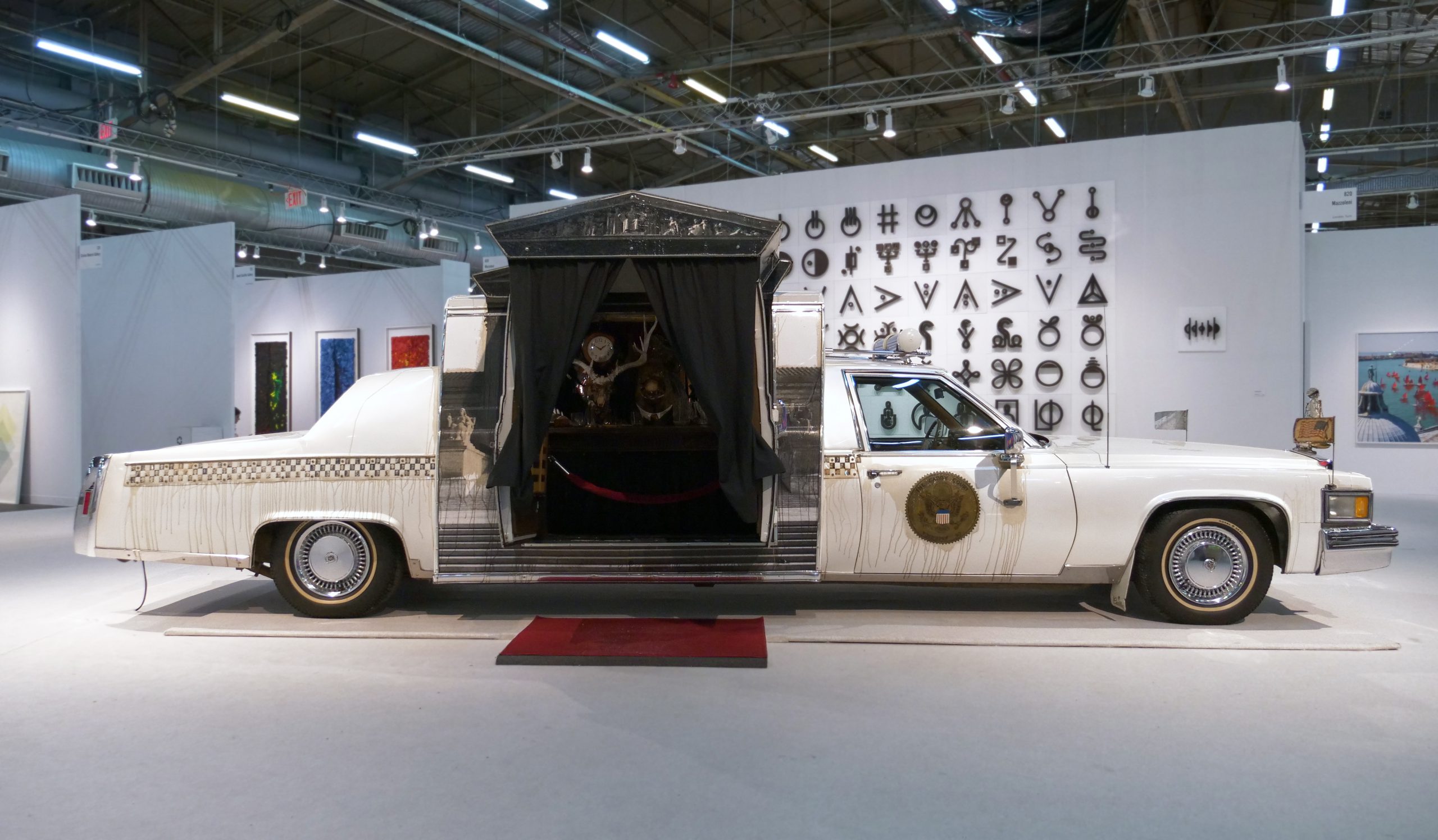 The Kienholzes created the mobile edifice by splicing a 1966 Dodge van between the front and back ends of a 1978 Cadillac. A blindfolded Justice with broken scales comprises its hood ornament; a checkerboard “racing stripe” bears portraits of all of the Supreme Court justices from 1789 to the year of the work’s creation; and on the car’s doors, the unofficial seal of “The Caddy Court of America” upholds the motto “Under God We Twist.” After passing through a portico lined with a law library, the viewer enters the court chamber to stand before the looming justices portrayed by nine taxidermy animal heads and sculls in formal robes. 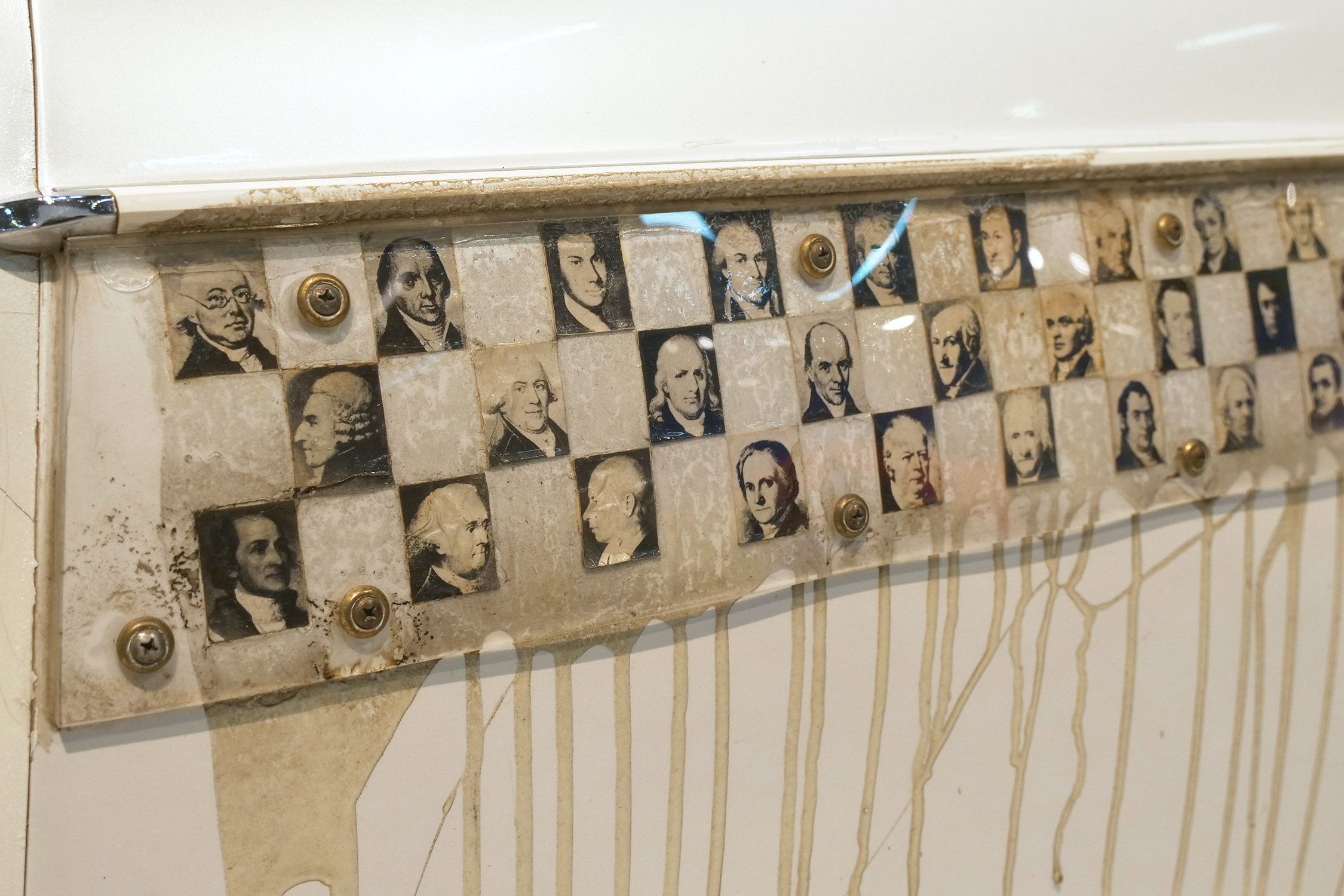 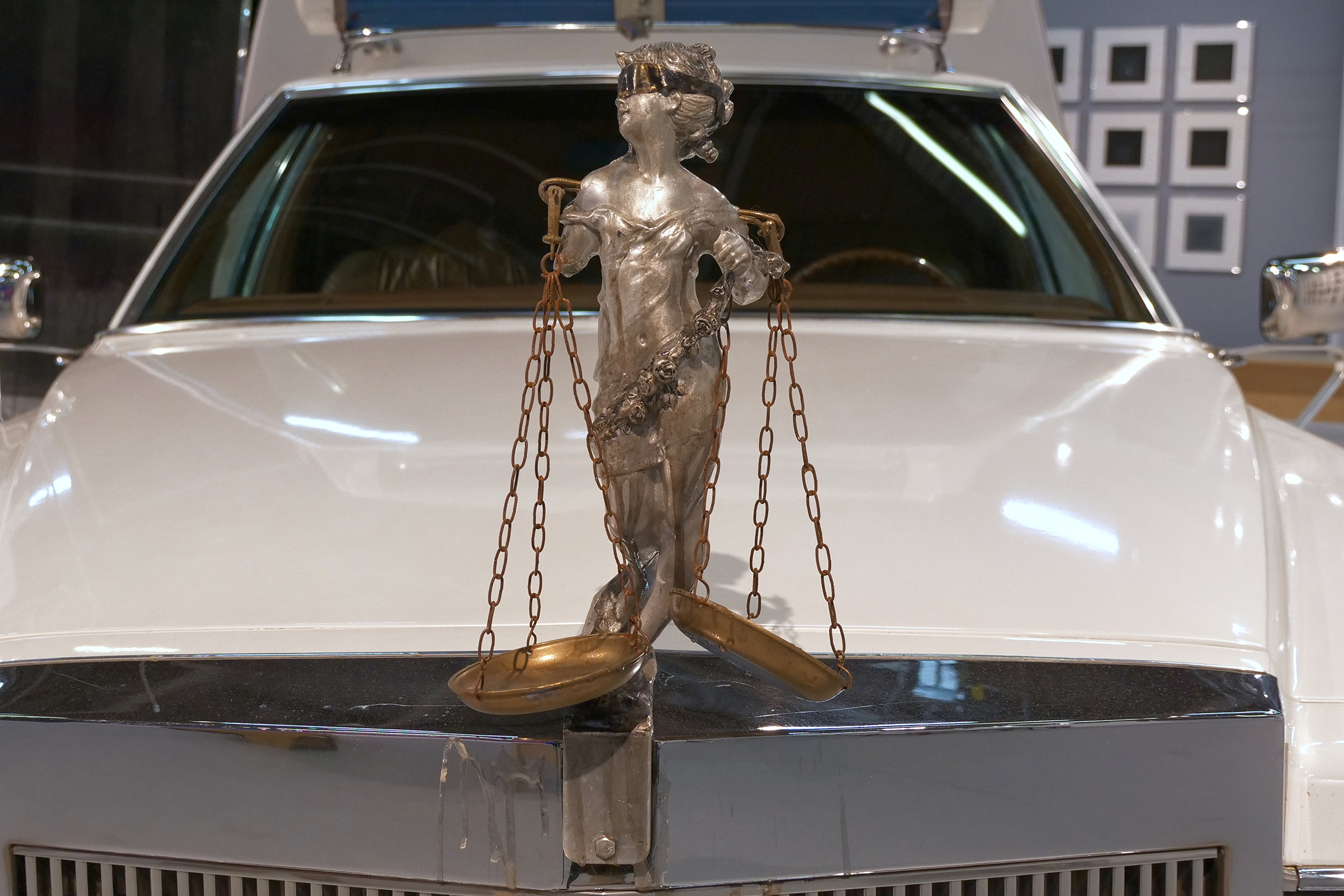 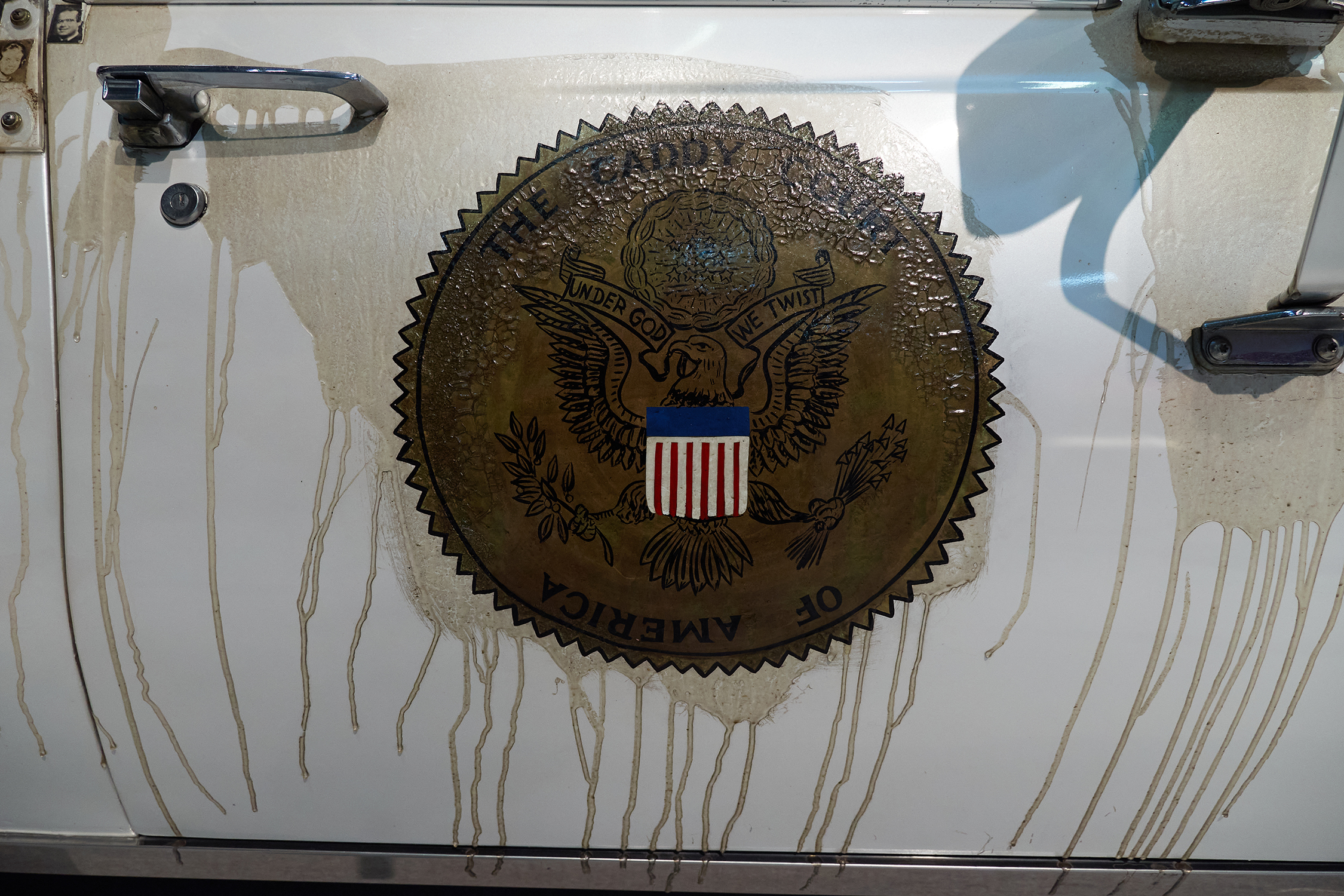 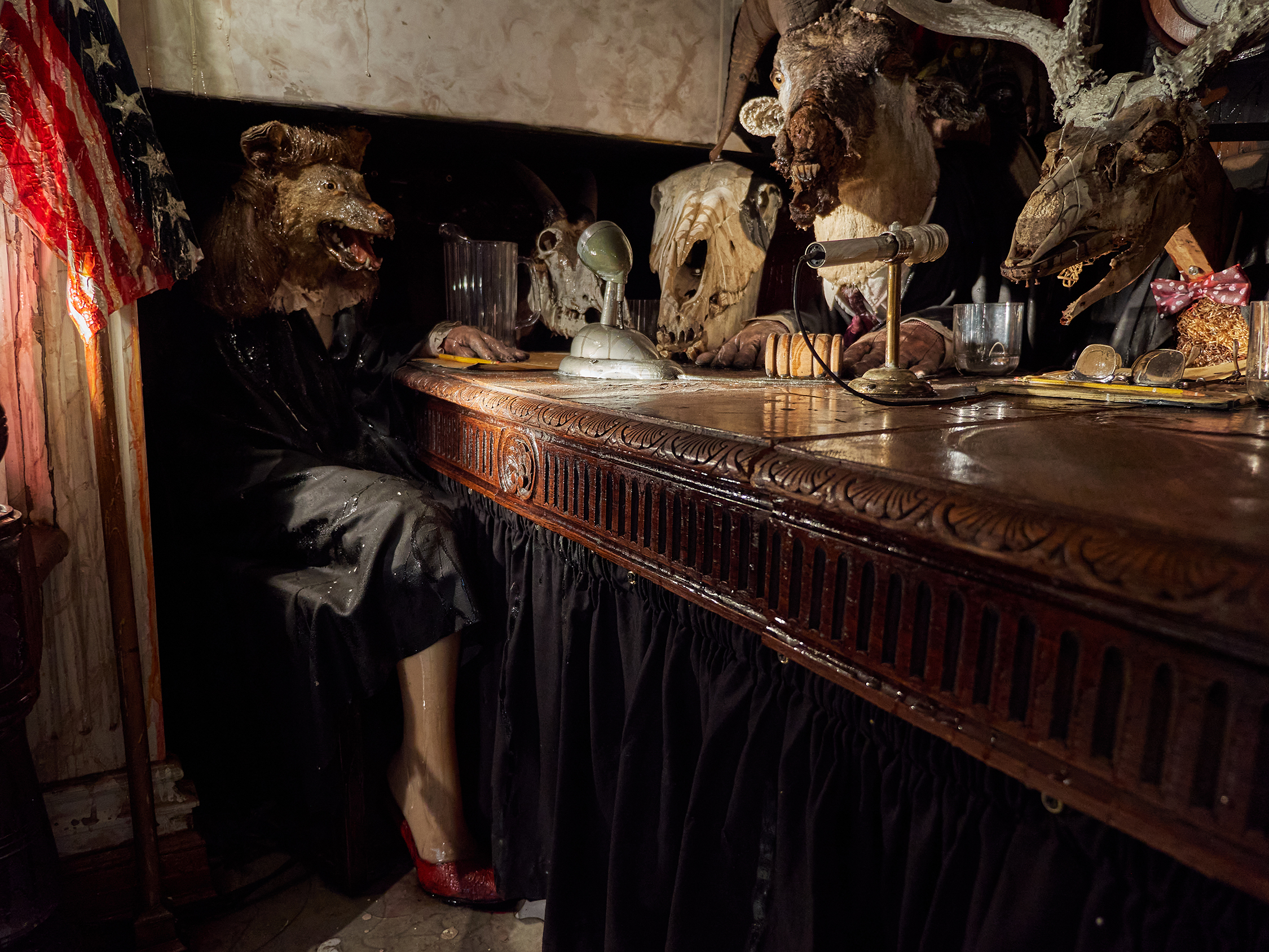 "We made The Caddy Court in 1986-87, so we could give our own comments on the decisions made by the Supreme Court. If we didn't like a decision, we could drive the piece to Washington D.C., park in front of the court, open the doors as set it up," explained Nancy Reddin Kienholz. "As I write this on December 15, 2000, I can't imagine a more germane time for this tableau to hit the road. Yesterday, The Supreme Court of America decided George W. Bush was to be our next President regardless of whether he actually won the election or not. I am watching the weather to see if it possible to drive the Caddy from Idaho to our Nation's capitol." 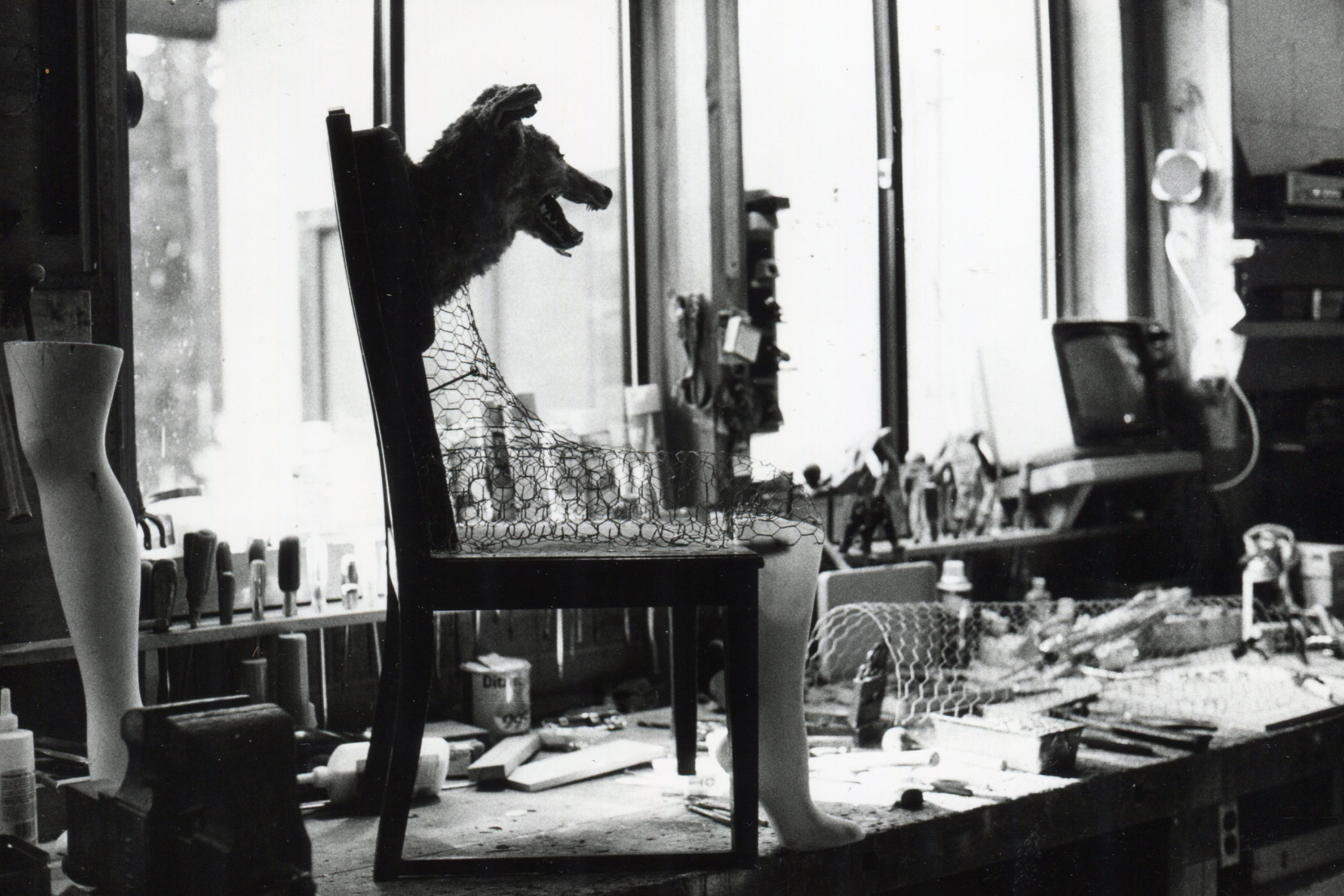 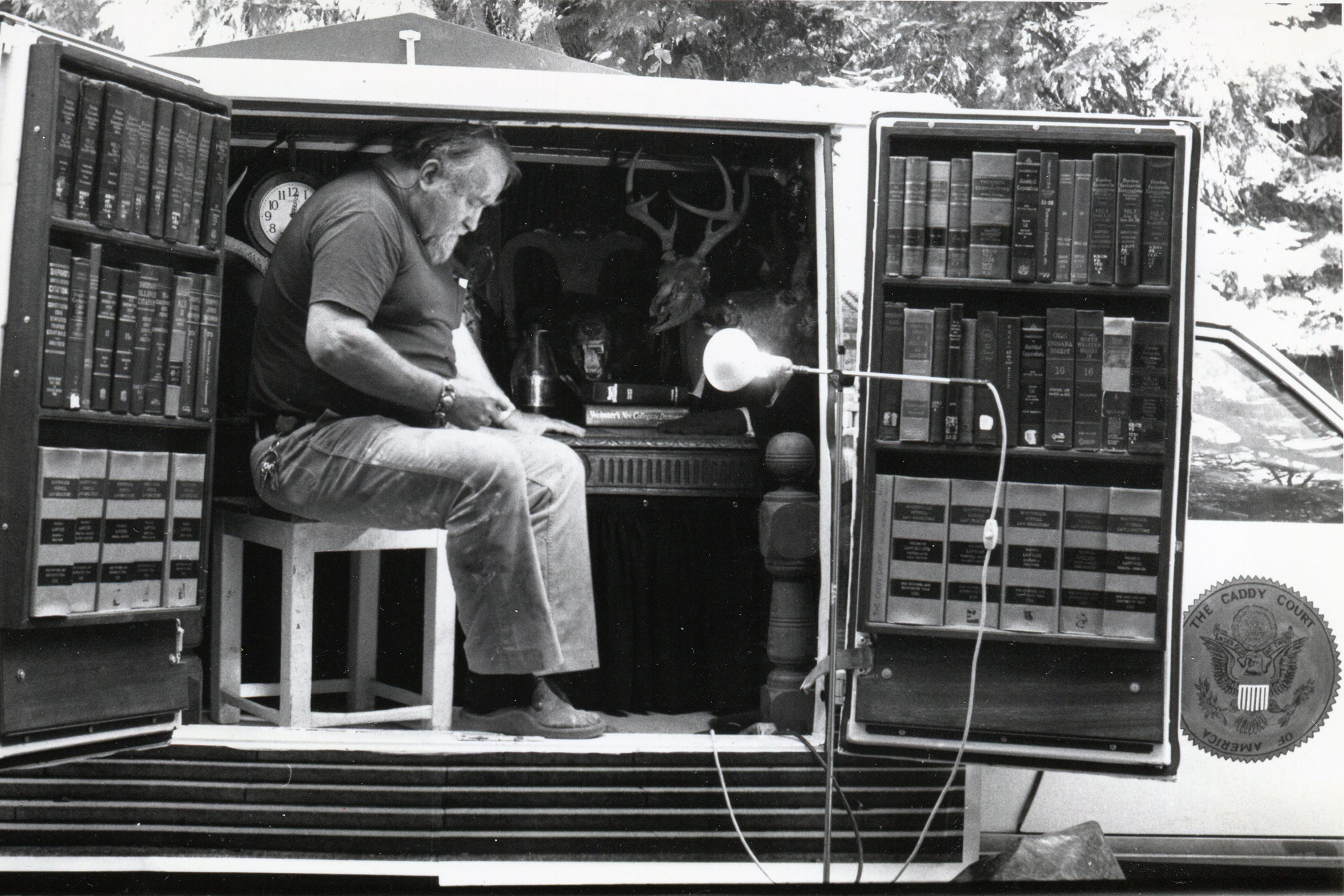 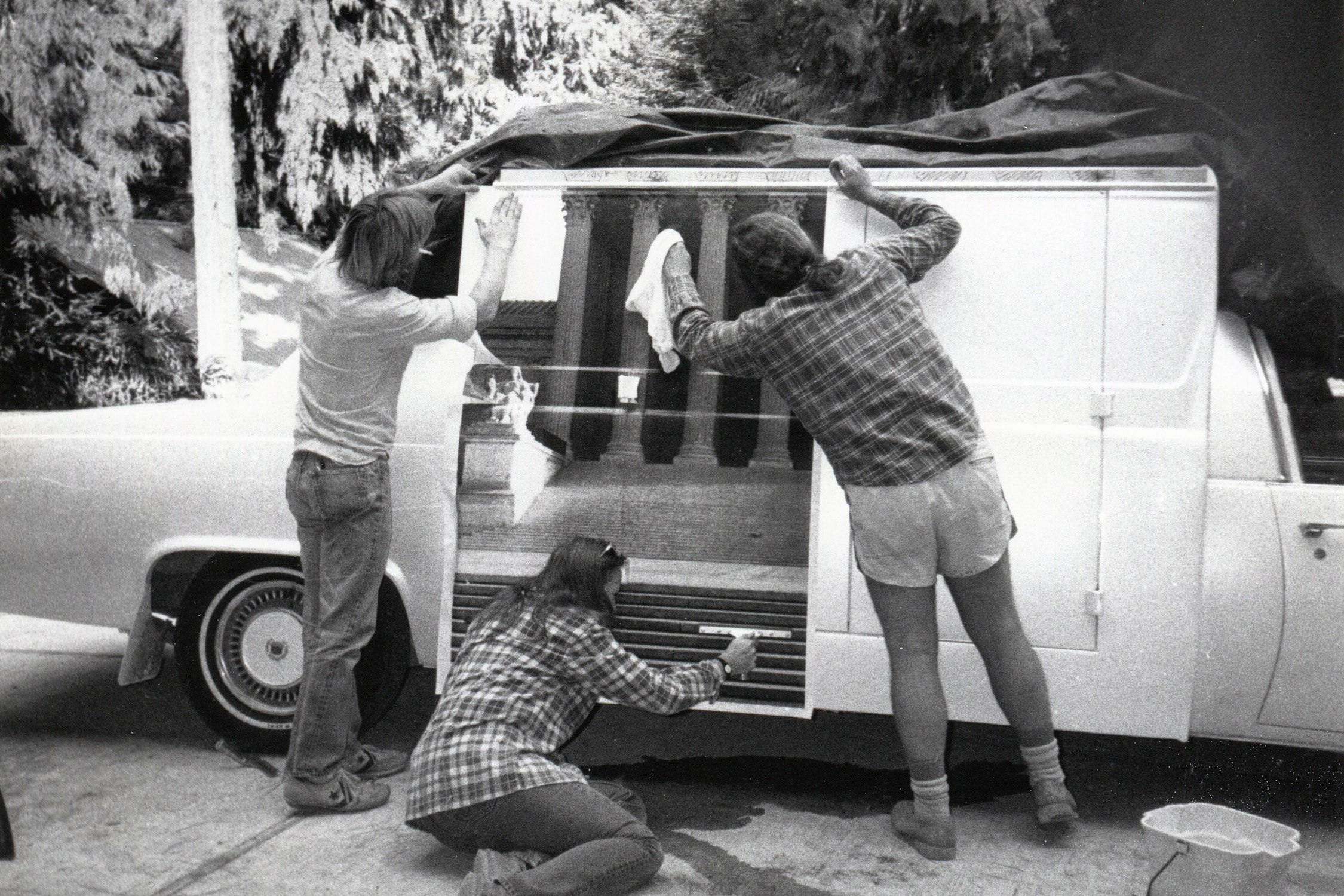 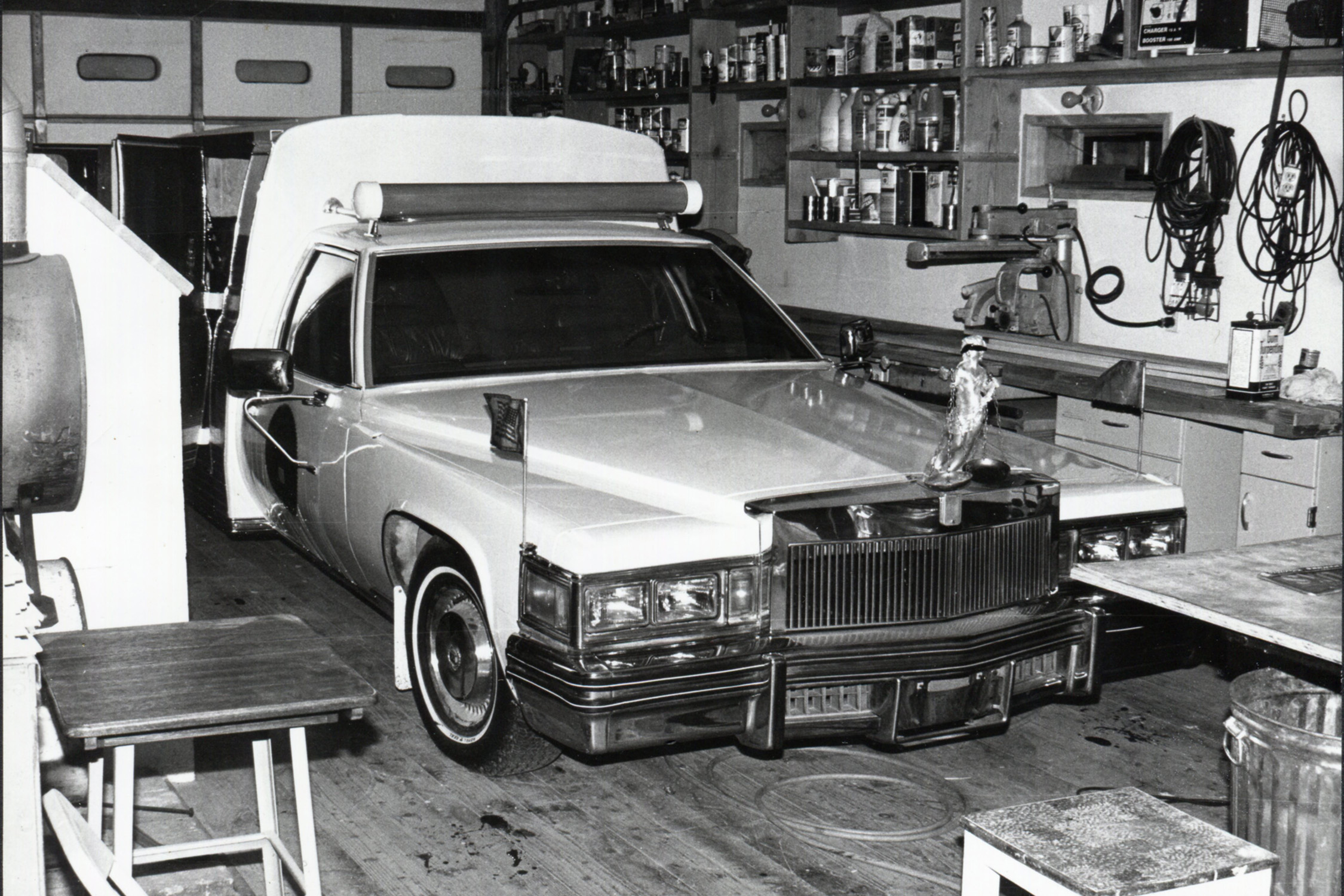 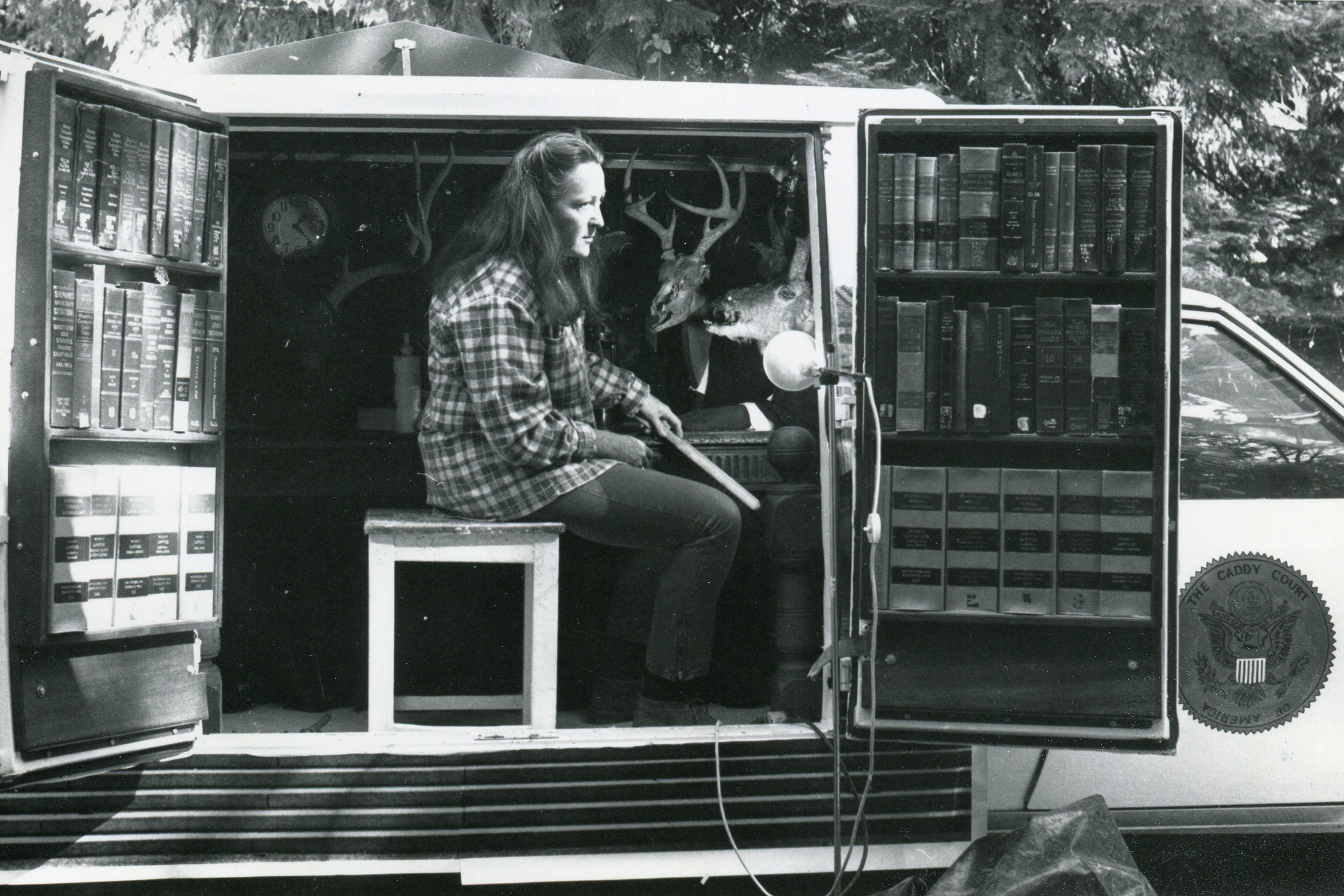 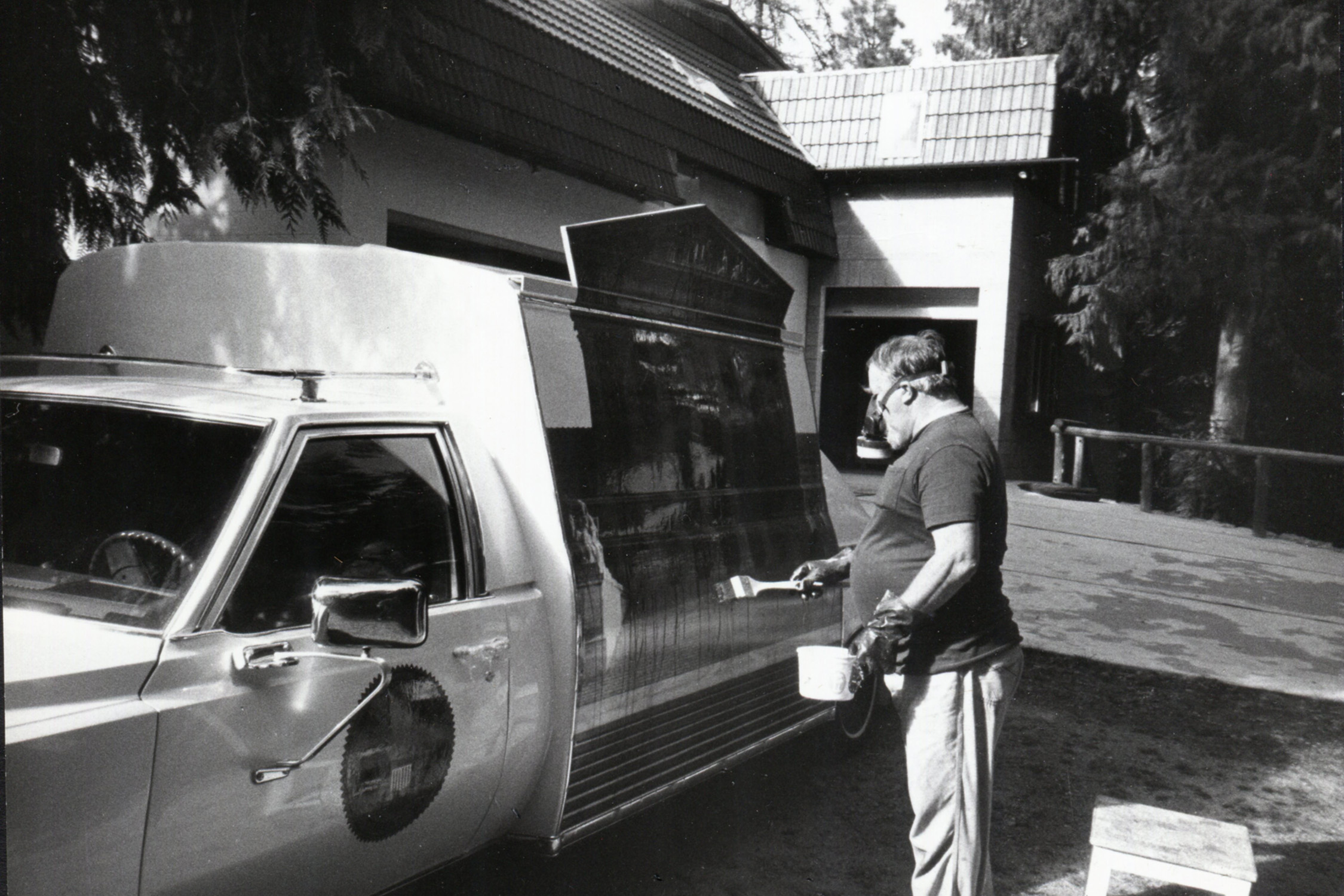 Edward and Nancy Kienholz
Making of The Caddy Court, 1986-87
Archival images courtesy of
The Estate of Nancy Reddin Kienholz

Although the Kienholzes began researching The Caddy Court in the early 1970s, the tableau continues to call for reflection upon the Judicial Branch’s power and scope, and the dominant role the Supreme Court plays in our daily lives. In the words of Edward Kienholz, “What we’re trying to do is to make visible the rush of fear that people have when you mention the Supreme Court.”