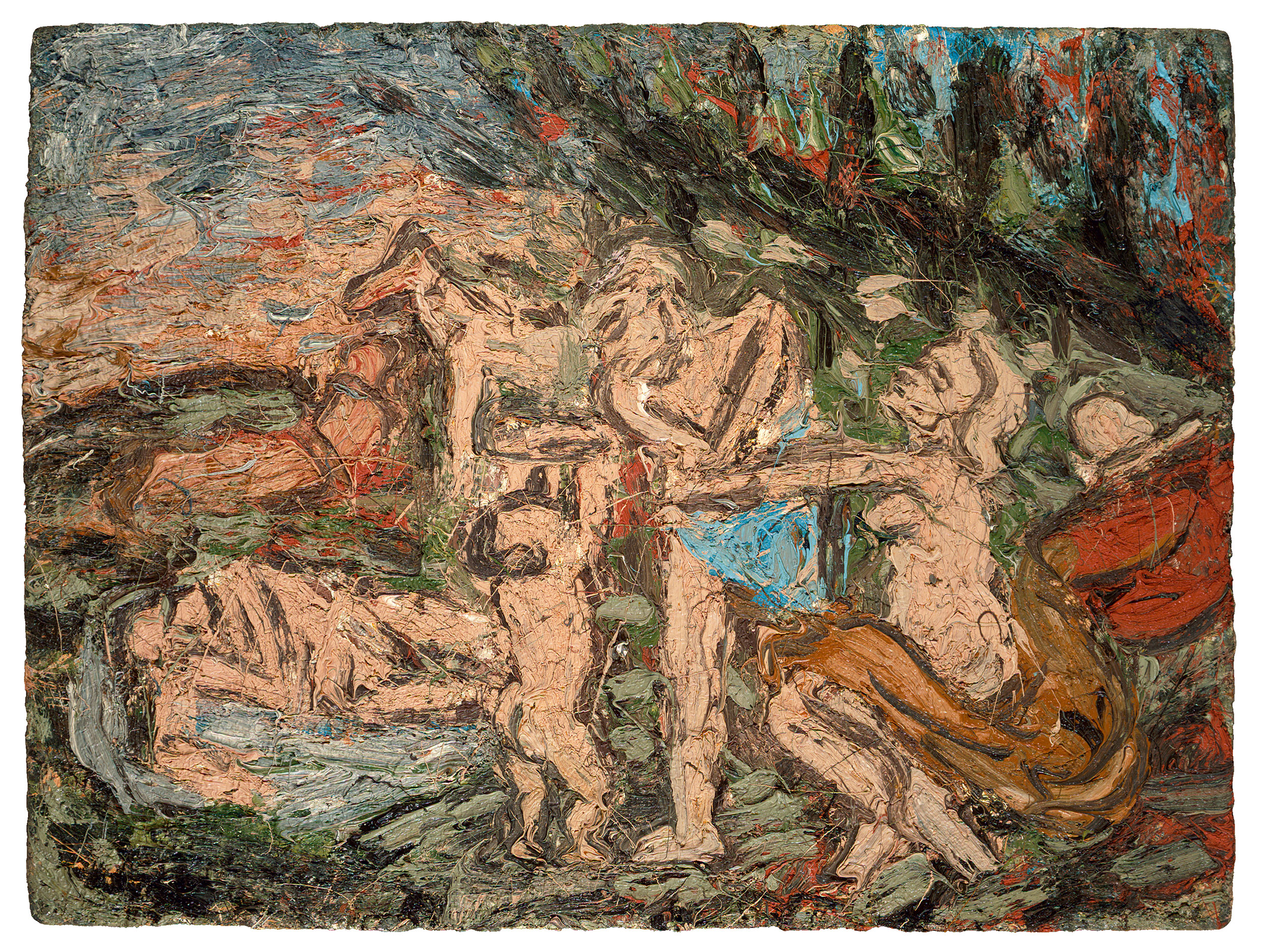 Leon Kossoff approached the Old Masters in much the same way as he did his more traditional subjects: fervently and with great dedication. The 17th-century painter Nicolas Poussin’s lush rendition of Cephalus and Aurora first caught Kossoff’s eye in the 1960s, and from this transformative moment Kossoff sought out Poussin as an inspiring force throughout his career. He returned again and again to Poussin’s works, as Andrea Rose writes, “searching and watching them, drawing from them in order to hone his skills and to absorb the essentials of composition and construction that makes these old paintings such supreme advisors.” Kossoff made three large paintings of Cephalus and Aurora in 1981. The landscapes appear as agitated as the lovers, the dawn sky glowing on the horizon, the trees inclining in the wind, the figures of Oceanus, Pegasus, Apollo and Terra caught up in the emotional maelstrom that engulfs the protagonists.

The above work is included in the New York presentation of Leon Kossoff: A Life in Painting. 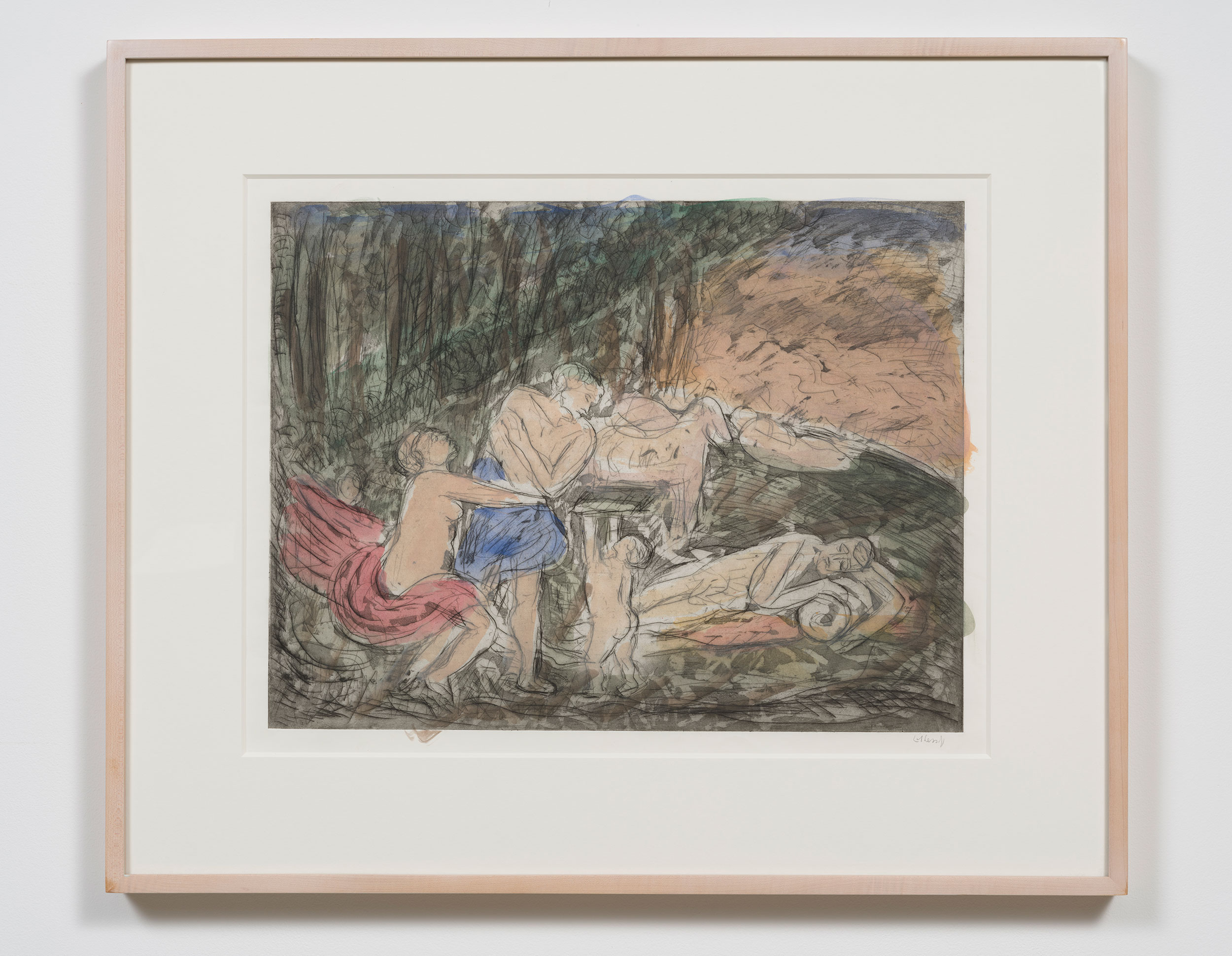 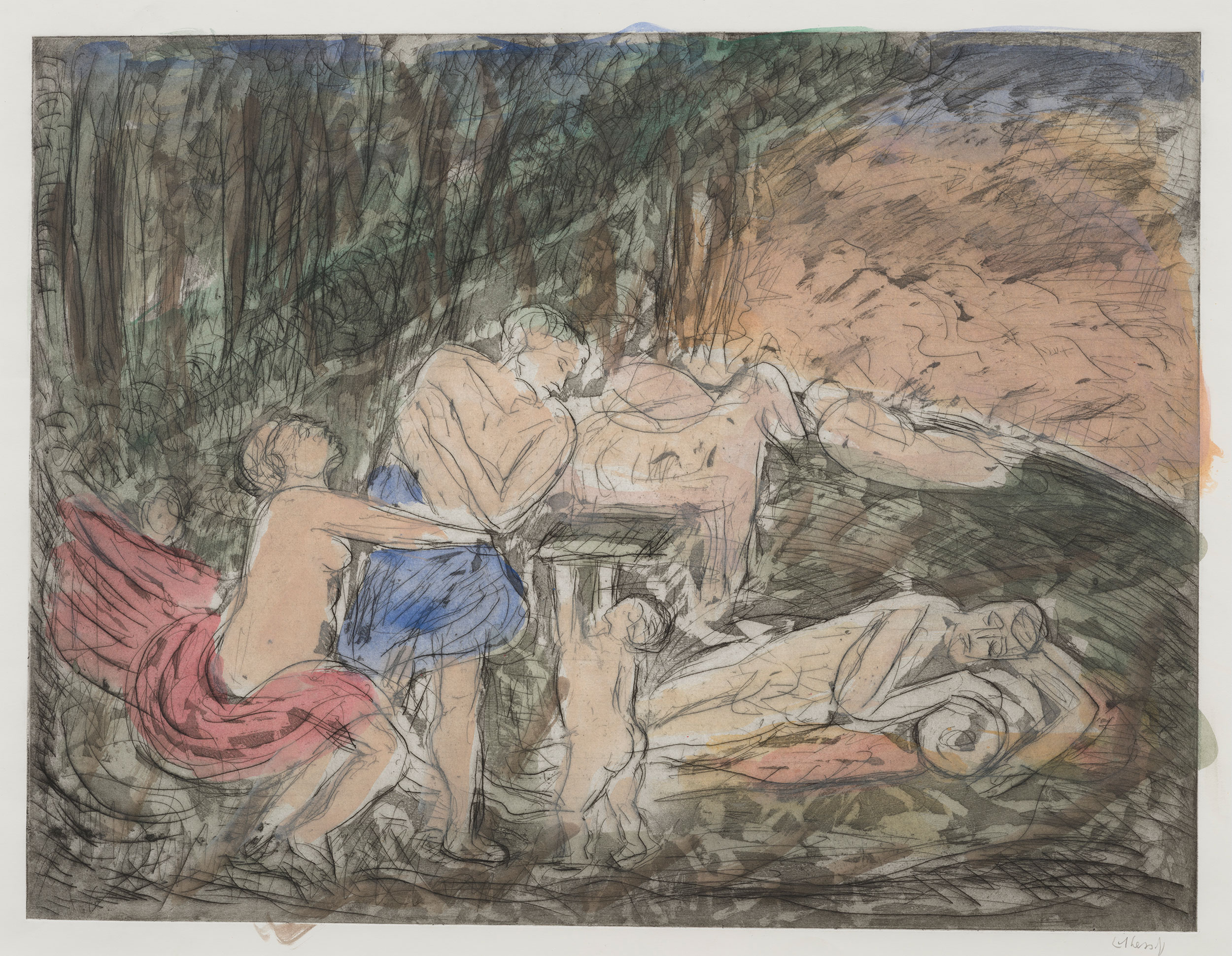 Describing one of Kossoff's paintings after Poussin’s Cephalus and Aurora in the exhibition catalogue Drawn to Painting, Richard Kendall writes:

"[It] is an insistently painted work, in its dense tactility and the fluid life that swirls around and through the closely argued composition, in the dragged color and the loops and skeins left behind by Kossoff’s improvised brushwork. When challenged, the artist has sometimes explained these pictures as an attempt to understand, in painterly language, the work of art he is addressing, of penetrating a little way into its identity and finding structures of his own to account for its achievement. Though he might resist the idea, we can add that the outcome is also a distinct act of creation, the making of an independent, self-sufficient painting that is uniquely the product neither of Nicolas Poussin nor of Leon Kossoff, but of a kind of retrospective conversation between them." 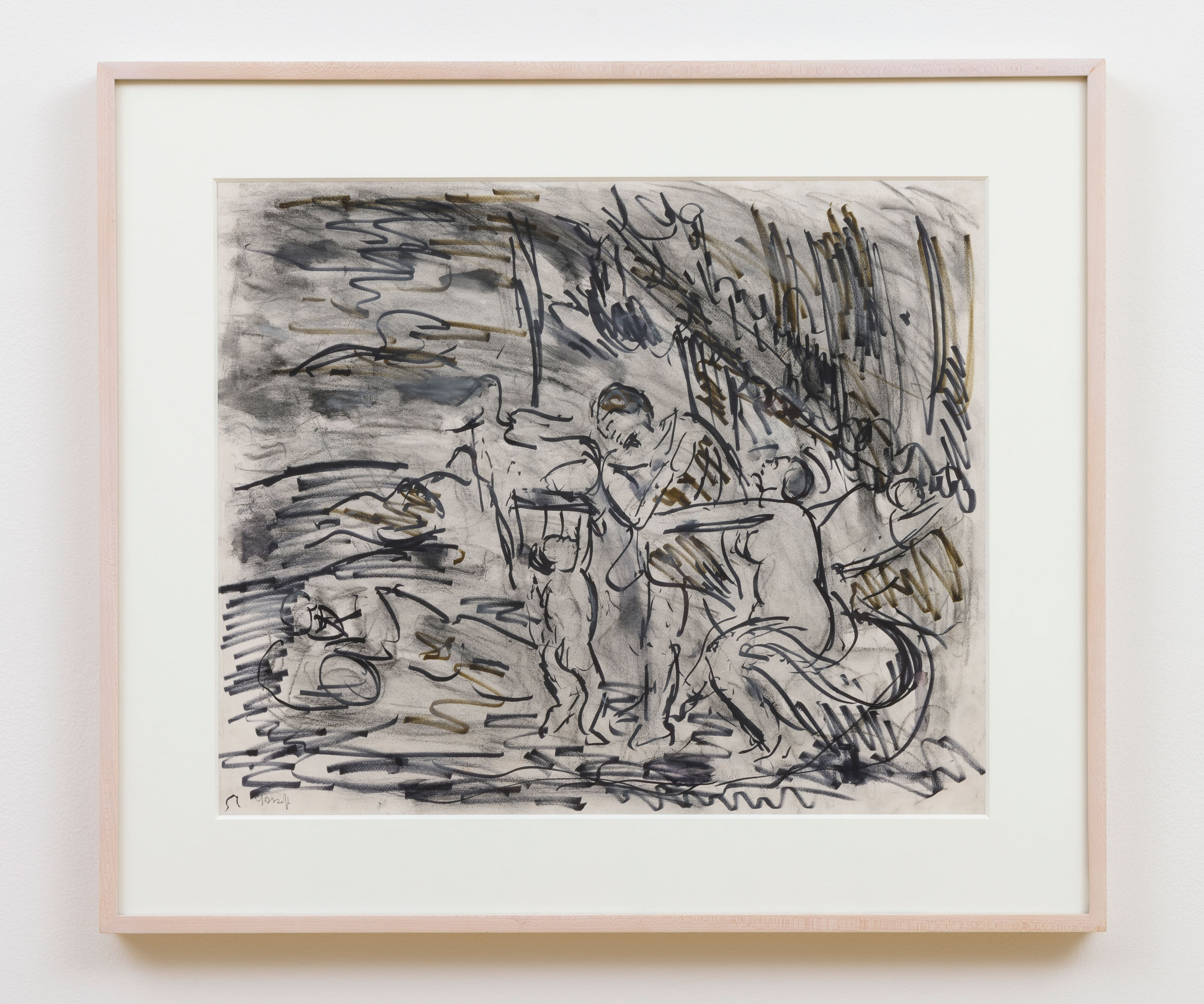 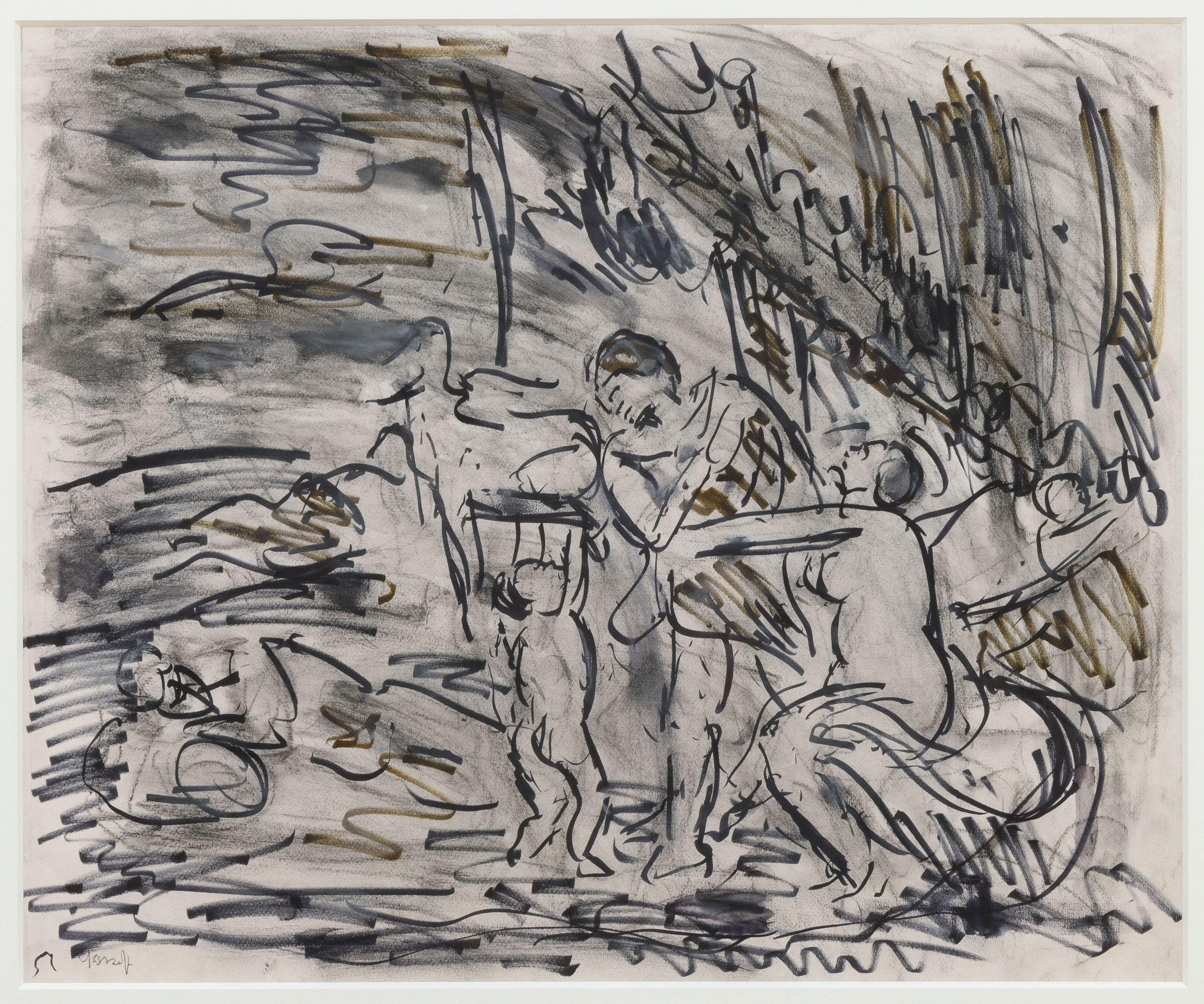 The great volume of Kossoff works inspired by Poussin evince the artist’s deep admiration for his predecessor as well his studious and exacting nature. In drawings, paintings, and etchings created in the halls of the National Gallery, London, Kossoff captured the energy and passion of Poussin as well as his rigor and classical balance. This 1985 drawing of Cephalus and Aurora practically vibrates with linear energy. Kossoff's dense, fast linework nearly obscures all but the central grouping of figures, yet the tumult of the landscape comes through. Commenting on Kossoff’s response to Poussin’s work in the exhibition catalogue Leon Kossoff: Drawing from Painting, Colin Wiggins writes:

"It has become conventional for critics and historians to discuss Poussin in terms of his measured draughtsmanship and his rigorously thought-out compositions. He is often cited as the intellectual painter par excellence, whose work is seen as the polar opposite of the exuberance and sensuousness of Rubens. Kossoff ignores such interpretation. For him Poussin is a painter of passion, an artist who communicates as much humanity and warmth as Rembrandt." 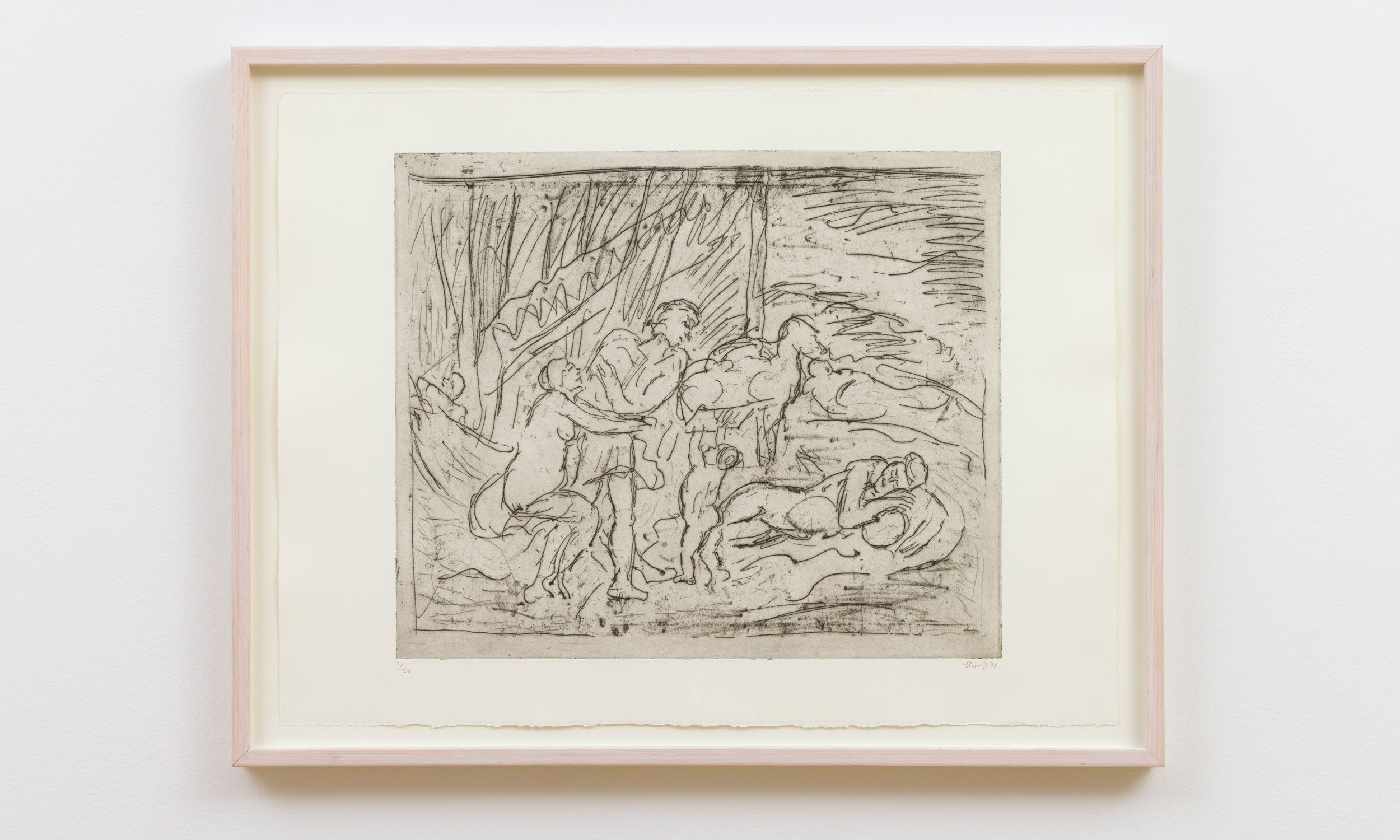 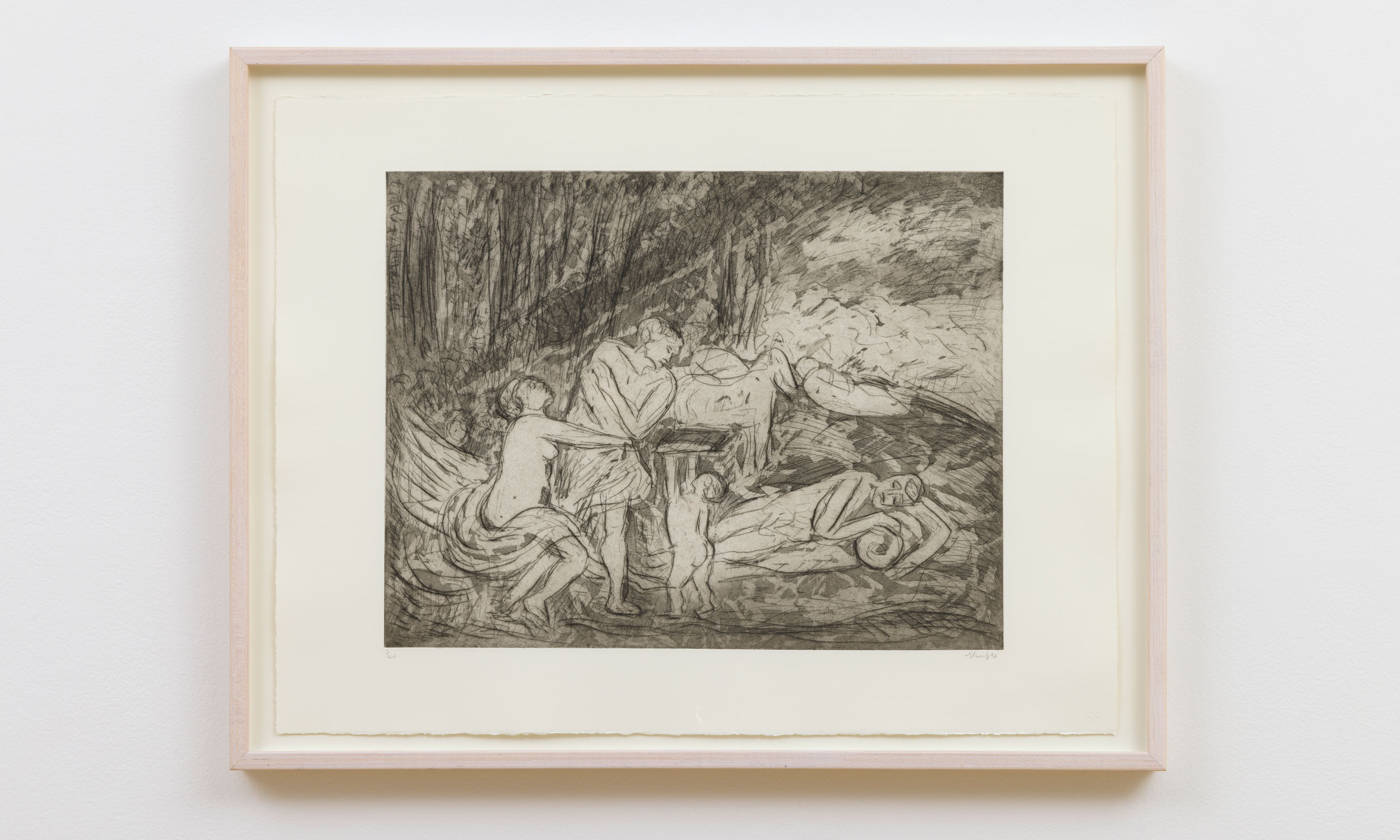 ﻿The painting From ‘Cephalus and Aurora’ by Poussin No. 2 is an early example of Kossoff’s engagement with Poussin; an engagement which would flourish following the Royal Academy’s 1995 Poussin retrospective. The prints that tackle the same subject arise from this later encounter and take two forms, each executed in collaboration with a different printmaker. Mark Balakjian produced precise, line-forward etchings that remain consistent throughout the edition. Cephalus and Aurora No. 1 exemplifies this approach, one that is developed further with tender, almost watercolor-like washes of aquatint in Cephalus and Aurora No. 2.

Cephalus and Aurora No. 3 was produced with printmaker Ann Dowker, whose artistic partnership with Kossoff was one of constant experimentation. Kossoff editions printed by Dowker vary in paper type, ink color, and printing weight. This produces varied editions in which each print is a unique artist's proof more analogous to a monotype than to the repetition of traditional printmaking. 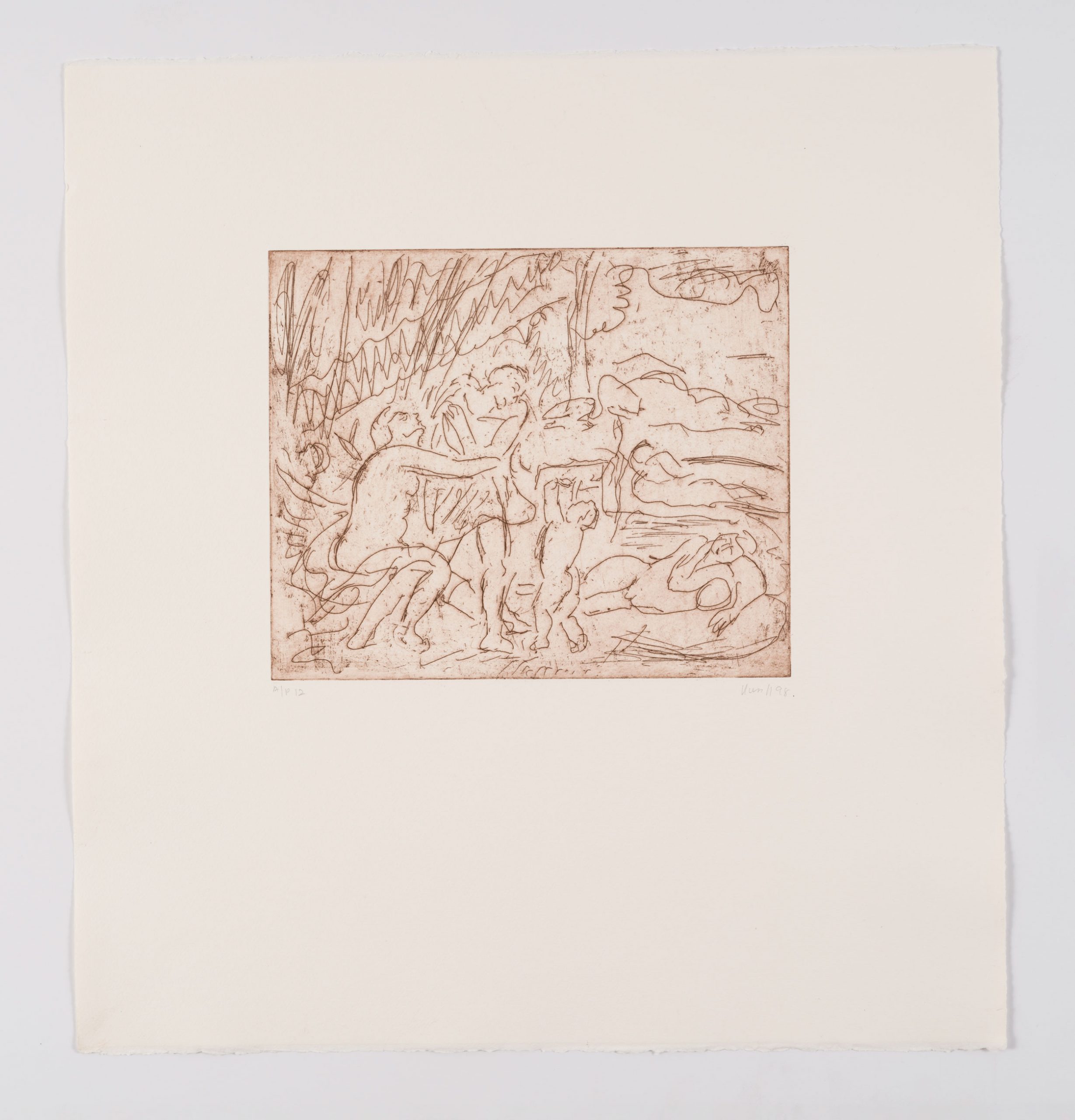 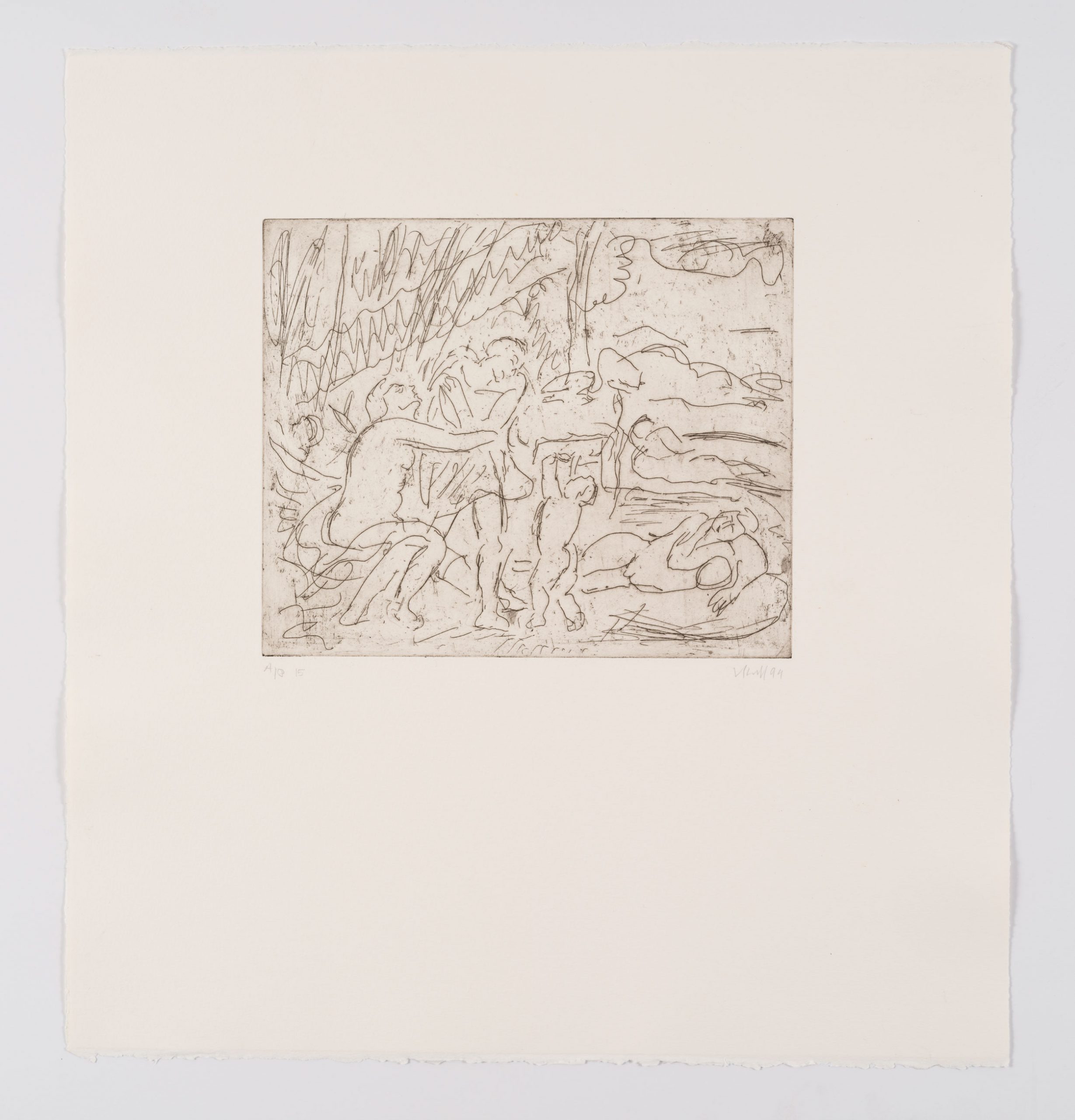 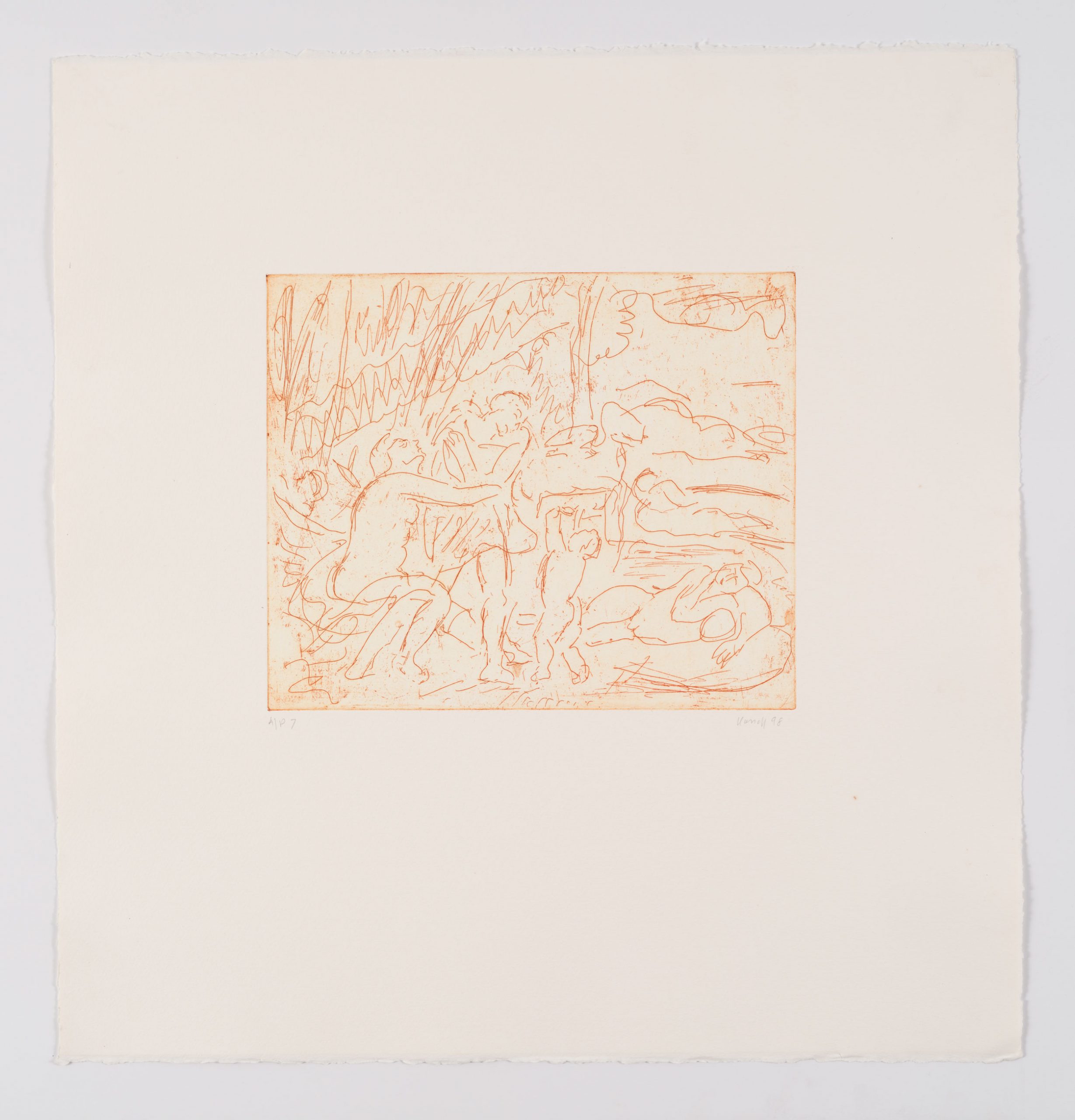 These prints and drawings are currently on view at L.A. Louver as part of Leon Kossoff: Transcriptions from Poussin. This exhibition is presented in conjunction with the retrospective Leon Kossoff: A Life in Painting, 26 January - 26 March 2022. 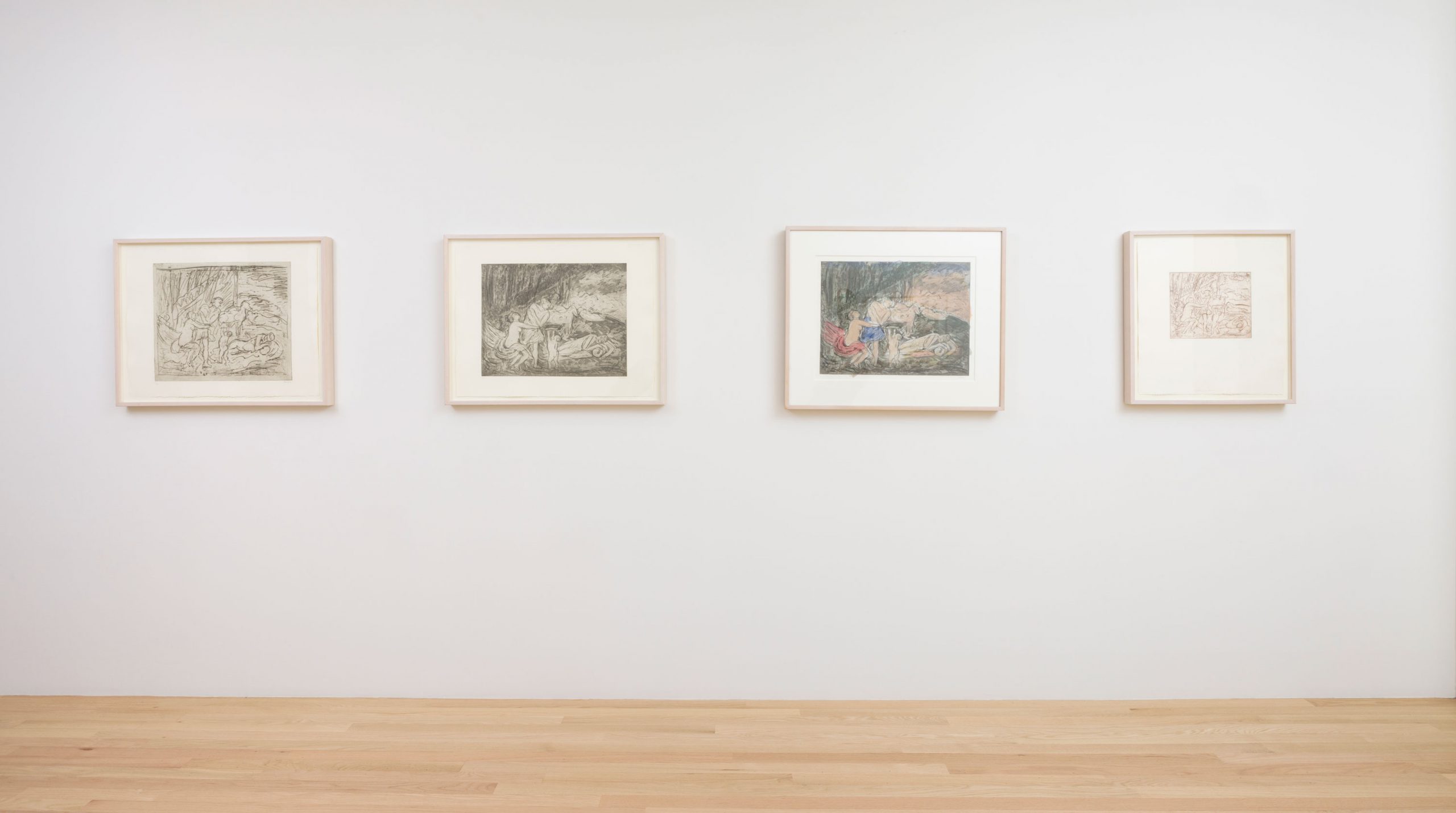